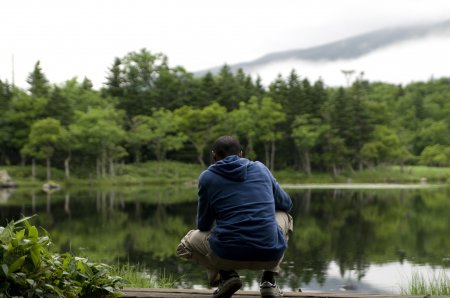 The main morphological features of the human body compared to other primates body include: functional forelimbs (in human upper limb - arm), high growth and differentiation of the mantle (cortex) of the brain, a significant weakening of the jaw apparatus, equal number of teeth, lack of overall hair , upright posture, prolonged childhood and so on. Modern man owns expressive language, interconnected with abstract thinking (development of the second signal system). However, the main distinguishing feature between man and animal is that people - a social being, the main condition and formation of life is socially useful labor, is closely associated with the emergence of society.

Conscious work and creating conditions of existence largely freed man from the power of a comprehensive natural selection that exists in the animal world. As a result, biological evolution, based on the adaptation of the organism to the conditions of the environment, in human society begins to give way to the evolution of material and spiritual culture. Most of the biological effects on the human body was the impact of socio-economic factors, and hence the general cultural level of the people.
If you liked this article about Man in Nature, please share it:
Recommended articles: