The cells are part of the tissues. 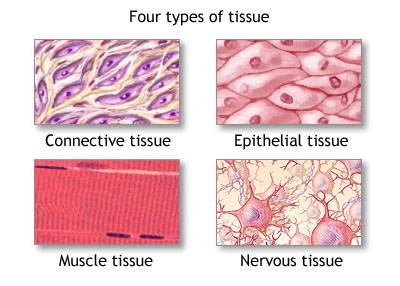 Tissue - is community of the cells and the extracellular substances united by origin, structure and function. Epithelial tissue or epithelium - the layer of cells that lie on the basement membraneunder which is a loose connective tissue. The epithelium covers the body surface (skin), lined with mucous membranesby separating the body from the environment and performing coating and protective functions and also forms the tissue of endocrine glands and glands of external secretion.

Smooth muscle tissue is composed of spindle mononuclear cells. With such tissue formed the walls of blood vessels, viscera.

The skeletal (striated) muscle tissue is composed of striated muscle fibers and forming the skeletal muscles, the muscles of the tongue, throat, larynx.

The nervous tissue consists of nerve cells (neurons) and neuroglia. Neuroglia performs supporting, trophic, protective, borderline function. Neuroglia cells form a cavities of the brain, central channel of spinal cord and form a base of the central nervous system the bodies surrounding neurons and their spines, carry out phagocytosis (glial macrophages). 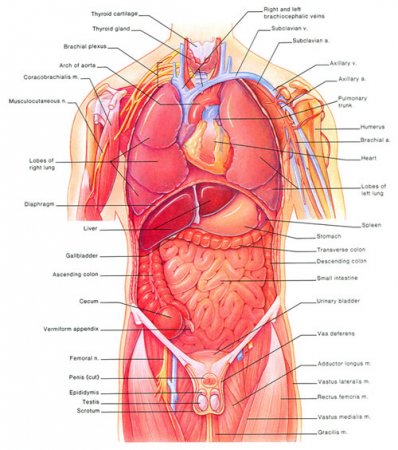 Organ (organum) - is part of the body that has a shape, internal structure, occupies a special place in the organism and performs a specific function. In the formation of every organ participate various tissues, but a major is one (for the brain - nervous, for muscle - muscular, for glands - epithelial), and others - auxiliaries.

The organs apparatus - the organs that perform joint function but have different origins (musculoskeletal system, endocrine system).
If you liked this article about Cells, tissues, organs, organs systems and organs apparatus, please share it:
Recommended articles: