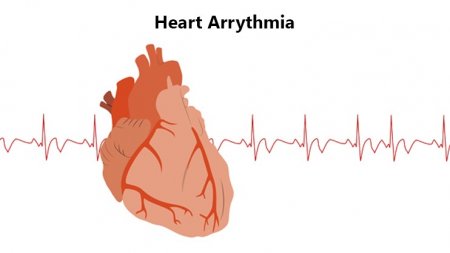 The patient's pulse, according to experienced doctors, is the mirror of heart health. A frequent or low pulse indicates a developing pathology. According to the rhythmic contraction of the heart muscle, doctors judge the blood flow, the health of the bloodstream, the state of the heart as a whole, and if the rhythm deviates from the norm, then this condition is called arrhythmia. And its development is influenced by:
- Disease of the heart or blood vessels;
- Disrupted hormonal background;
- Stress, depression, apathy;
- Any chronic illness;
- Overload of the body, both physical and psychological;
- Alcoholic drinks, strong coffee, smoking, energy drinks.

This is how doctors call any deviation from the norm, and this can happen if a person feels chills, shortness of breath, panic, even with dizziness, the rhythm can go astray. Heart rhythm disturbances can be very different, for example, slow, too frequent, irregular, irregular ...

When an attack begins, the patient feels discomfort behind the sternum, he becomes anxious and there is a feeling of panic, fear of death. The heart is beating so fast that it seems as if it is about to burst out; with this there is nausea, dizziness, pressure drops, darker in the eyes ... The person feels that he is now losing consciousness.

The danger of such a pathological condition is that at these minutes "blood starvation" occurs, which has a detrimental effect on soft tissues, internal organs, the brain, and all systems.

The reasons for the development of pathology

- Vegetovascular dystonia.
The patient has an increased vascular tone, which is why a lump in the throat is felt, and the heart beats chaotically.
- Disease of the sinus node.
The heart muscle contracts unevenly and rarely.
- Atrial fibrillation.
There is a "skip" of the heart contraction, or vice versa, there is an "extra" contraction and this is due to extrasystole.
It is noteworthy that an insidious ailment can also appear due to neglected spondylosis of the thoracic region, impaired thyroid function, overweight, and respiratory diseases.

Symptoms of a cardiac disease

You should go to the doctor if a person feels: shortness of breath, chest pain, weakness, lack of air, does not get enough sleep, even if he sleeps all night, or suffers from insomnia, irritability, fear of death.

How are heart interruptions diagnosed?

The doctor listens to the heart rhythm and if it is less than fifty beats, then this is bradycardia, and when there are more than a hundred contractions, then this is tachycardia. In the case when the rhythm "fits" into the norm (from fifty to one hundred), but some additional contractions or violations are revealed, then this is already an arrhythmia. But, to clearly see the ailment, the doctor will help - an EKG.
After the illness has been diagnosed, it is necessary to find the cause of the arrhythmia, and the doctor prescribes the following examinations for the patient: ECG monitoring, electrocardiography, ultrasound.

If not treated, will it go away by itself?

No, the disease will progress and will begin to provoke complications. Among the side effects of arrhythmia are:
- Thrombosis, heart attack and stroke;
- Ischemic disease of the brain;
- The heart wears out quickly due to oxygen starvation;
- The pumping function is weakened, and an overstrain of any cardiac department occurs.

The doctor prescribes medications that must be taken schematically or in combination with other procedures.

It is important to remember that only a doctor can establish the cause of the ailment and prescribe therapy, and only after an examination! Choosing medicines on your own and taking them haphazardly is dangerous!A deep breath through the nose and a slow exhalation through the mouth will help to alleviate the attack; repeat as long as the attack subsides. If the attack is accompanied by severe nausea, then you should try to induce vomiting, the attack can be immediately released.
And yet, even if the attack has released by itself, you should not let the disease take its course - you have to go to the doctor.
Preventive measures.

At the initial stage, while the attacks are not strong, cardiac pathology is easier to identify and the treatment proceeds without complications. The first advice is to be examined by a cardiologist regularly; the second tip is compliance with the rules of healthy lifestyle, elimination of stressful situations, rational nutrition.
If you liked this article about Arrhythmia, please share it:
Recommended articles: