The cardiovascular system of the upper torso 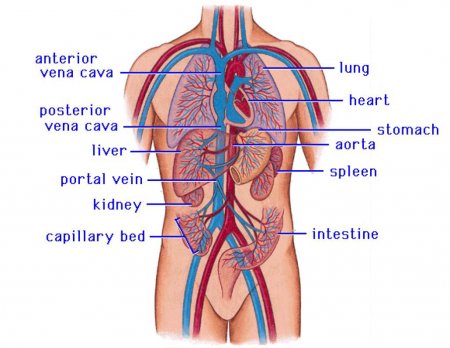 The cardiovascular system of the upper torso includes the heart and most of the major blood vessels of the circulatory system. These vital structures are critical to the process of pumping deoxygenated blood to the lungs for gas exchange as well as pumping oxygenated blood to the body’s tissues to support their metabolic functions.

Oxygenated blood exits the left ventricle of the heart and enters the aorta, the largest artery in the human body. The ascending aorta extends superiorly from the heart before making a 180-degree turn to the left in a portion called the arch of the aorta. From there it passes posterior to the heart as the thoracic aorta on its way toward the abdomen.

The aorta branches as it passes through the thorax, branching off into several major arteries as well as many minor ones.

- The left and right coronary arteries branch off from the ascending aorta, supplying the heart with its vital blood supply.
- The arch of the aorta branches off into three major arteries – the brachiocephalic trunk, left common carotid artery, and left subclavian artery. These arteries collectively supply the head and arms with oxygenated blood.
- The thoracic aorta continues to branch into many tiny arteries that supply blood to the organs, muscles, and skin of the thorax before entering the abdomen as the abdominal aorta.
- Blood from the abdominal aorta supplies oxygen and nutrients to the vital organs of the abdomen through arteries such as the celiac trunk and common hepatic arteries.