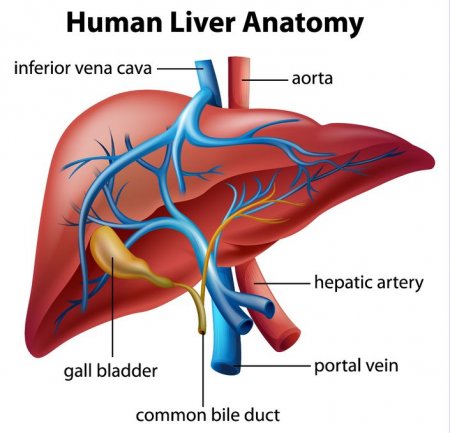 Weighing in at around 3 pounds, the liver is the body’s second largest organ; only the skin is larger and heavier. The liver performs many essential functions related to digestion, metabolism, immunity, and the storage of nutrients within the body. These functions make the liver a vital organ without which the tissues of the body would quickly die from lack of energy and nutrients. Fortunately, the liver has an incredible capacity for regeneration of dead or damaged tissues; it is capable of growing as quickly as a cancerous tumor to restore its normal size and function.

Anatomy of the liver
Gross Anatomy
The liver is a roughly triangular organ that extends across the entire abdominal cavity just inferior to the diaphragm. Most of the liver’s mass is located on the right side of the body where it descends inferiorly toward the right kidney. The liver is made of very soft, pinkish-brown tissues encapsulated by a connective tissue capsule. This capsule is further covered and reinforced by the peritoneum of the abdominal cavity, which protects the liver and holds it in place within the abdomen.

The peritoneum connects the liver in 4 locations: the coronary ligament, the left and right triangular ligaments, and the falciform ligament. These connections are not true ligaments in the anatomical sense; rather, they are condensed regions of peritoneal membrane that support the liver.

The liver consists of 4 distinct lobes – the left, right, caudate, and quadrate lobes.

Blood Vessels
The blood supply of the liver is unique among all organs of the body due to the hepatic portal vein system. Blood traveling to the spleen, stomach, pancreas, gallbladder, and intestines passes through capillaries in these organs and is collected into the hepatic portal vein. The hepatic portal vein then delivers this blood to the tissues of the liver where the contents of the blood are divided up into smaller vessels and processed before being passed on to the rest of the body. Blood leaving the tissues of the liver collects into the hepatic veins that lead to the vena cava and return to the heart. The liver also has its own system of arteries and arterioles that provide oxygenated blood to its tissues just like any other organ.

Lobules
The internal structure of the liver is made of around 100,000 small hexagonal functional units known as lobules. Each lobule consists of a central vein surrounded by 6 hepatic portal veins and 6 hepatic arteries. These blood vessels are connected by many capillary-like tubes called sinusoids, which extend from the portal veins and arteries to meet the central vein like spokes on a wheel.

- Kupffer cells are a type of macrophage that capture and break down old, worn out red blood cells passing through the sinusoids.
- Hepatocytes are cuboidal epithelial cells that line the sinusoids and make up the majority of cells in the liver. Hepatocytes perform most of the liver’s functions – metabolism, storage, digestion, and bile production. Tiny bile collection vessels known as bile canaliculi run parallel to the sinusoids on the other side of the hepatocytes and drain into the bile ducts of the liver.
If you liked this article about The liver, please share it:
Recommended articles: