Physiology of the stomach 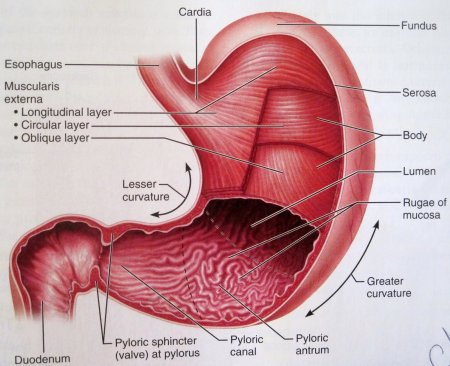 Storage
In the mouth, we chew and moisten solid food until it becomes a small mass known as a bolus. When we swallow each bolus, it then passes through the esophagus to the stomach where it is stored along with other boluses and liquids from the same meal.

The size of the stomach varies from person to person, but on average it can comfortably contain 1-2 liters of food and liquid during a meal. When stretched to its maximum capacity by a large meal or overeating, the stomach may hold up to 3-4 liters. Distention of the stomach to its maximum size makes digestion difficult, as the stomach cannot easily contract to mix food properly and leads to feelings of discomfort.

Secretion
The stomach produces and secretes several important substances to control the digestion of food. Each of these substances is produced by exocrine or endocrine cells found in the mucosa.

- The main exocrine product of the stomach is gastric juice – a mixture of mucus, hydrochloric acid, and digestive enzymes. Gastric juice is mixed with food in the stomach to promote digestion.

- Specialized exocrine cells of the mucosa known as mucous cells secrete mucus into the lumen of the stomach and into the gastric pits. This mucus spreads across the surface of the mucosa to coat the lining of the stomach with a thick, acid- and enzyme-resistant barrier. Stomach mucus is also rich in bicarbonate ions, which neutralize the pH of stomach acid.

- Chief cells, also found within the gastric pits of the stomach, produce two digestive enzymes: pepsinogen and gastric lipase. Pepsinogen is the precursor molecule of the very potent protein-digesting enzyme pepsin. Because pepsin would destroy the chief cells that produce it, it is secreted in its inactive pepsinogen form. When pepsinogen reaches the acidic pH found in the stomach thanks to hydrochloric acid, it changes shape and becomes the active enzyme pepsin. Pepsin then breaks dietary proteins into their amino acid building blocks. Gastric lipase is an enzyme that digests fats by removing a fatty acid from a triglyceride molecule.

- G cells are endocrine cells found at the bottom of the gastric pits. G cells release the hormone gastrin into the bloodstream in response to many stimuli, such as signals from the vagus nerve; the presence of amino acids in the stomach from digested proteins; and the stretching of the stomach wall during a meal. Gastrin travels through the blood to various receptor cells throughout the stomach where it stimulates the glands and muscles of the stomach. Glandular stimulation by gastrin leads to increased secretion of gastric juice to increase digestion. Stimulation of smooth muscles by gastrin leads to stronger contractions of the stomach and the opening of the pyloric sphincter to move food into the duodenum. Gastrin also binds to receptor cells in the pancreas and gallbladder where it increases the secretion of pancreatic juice and bile.

- The mixing action of the stomach walls allows mechanical digestion to occur in the stomach. The smooth muscles of the stomach produce contractions known as mixing waves that mix the boluses of food with gastric juice. This mixing leads to the production of the thick liquid known as chyme.

- While food is being physically mixed with gastric juice to produce chyme, the enzymes present in the gastric juice chemically digest large molecules into their smaller subunits. Gastric lipase splits triglyceride fats into fatty acids and diglycerides. Pepsin breaks proteins into smaller amino acids. The chemical digestion begun in the stomach will not be completed until chyme reaches the intestines, but the stomach prepares hard-to-digest proteins and fats for further digestion.

Hormonal control
The activity of the stomach is under the control of several hormones that regulate the production of stomach acid and the release of food into the duodenum.

- Gastrin, produced by the G cells of the stomach itself, increases the activity of the stomach by stimulating increased gastric juice production, muscle contraction, and gastric emptying through the pyloric sphincter.

- Cholecystokinin (CCK), produced by the mucosa of the duodenum, is a hormone that acts to slow gastric emptying by contracting the pyloric sphincter. CCK is released in response to food rich in proteins and fats, which are difficult for the body to digest. By inhibiting gastric emptying, CCK allows food to be stored in the stomach longer to promote improved digestion by the stomach and to give the pancreas and gallbladder time to release enzymes and bile to increase digestion in the duodenum.

- Secretin, another hormone produced by the duodenum's mucosa, responds to the acidity of chyme entering the duodenum from the stomach. Secretin travels through the bloodstream to the stomach where it slows the production of gastric juice by the exocrine glands of the mucosa. Secretin also promotes the production of pancreatic juice and bile that contain acid-neutralizing bicarbonate ions. The net effect of secretin is to protect the intestines from the damaging effects of acidic chyme.
If you liked this article about Physiology of the stomach, please share it:
Recommended articles: