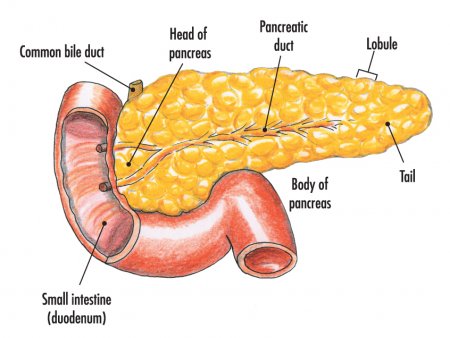 Microscopic Anatomy
The pancreas is classified as a heterocrine gland because it contains both endocrine and exocrine glandular tissue. The exocrine tissue makes up about 99% of the pancreas by weight while endocrine tissue makes up the other 1%. The endocrine tissue is arranged into many small masses known as acini. Acini are small raspberry-like clusters of exocrine cells that surround tiny ducts. The exocrine cells in the acini produce digestive enzymes that are secreted from the cells and enter the ducts. The ducts of many acini connect to form larger and larger ducts until the products of many acini run into the large pancreatic duct.

The endocrine portion of the pancreas is made of small bundles of cells called islets of Langerhans. Many capillaries run through each islet to carry hormones to the rest of the body. There are 2 main types of endocrine cells that make up the islets: alpha cells and beta cells. Alpha cells produce the hormone glucagon, which raises blood glucose levels. Beta cells produce the hormone insulin, which lowers blood glucose levels.
If you liked this article about The pancreas, please share it:
Recommended articles: