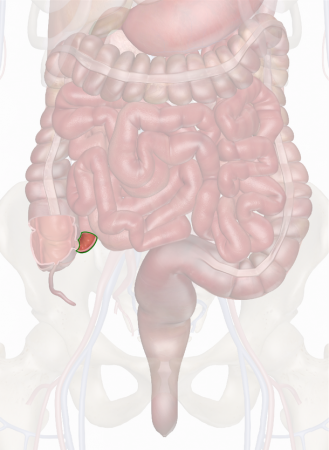 Anatomy of the terminal ileum
The terminal ileum is located on the right side of the abdominopelvic cavity in the umbilical and hypogastric regions. It is a tube about 1.25 to 1.5 inches (3 to 4 cm) long at the end of the ileum and terminates at the ileocecal sphincter. The ileocecal sphincter is a band of smooth muscle that controls the flow of chyme from the ileum into the cecum of the large intestine.

- The innermost layer, the mucosa, contains epithelial cells whose function is specialized for the absorption of nutrients from chyme in the lumen. Masses of lymphatic tissue known as Peyer’s patches dot the surface of the mucosa to detect the presence of pathogens in the chyme.
- Surrounding the mucosa is the submucosa layer that contains the nerves and blood vessels, which support the other tissue layers of the terminal ileum.
- The muscularis layer surrounds the submucosa and contains bands of smooth muscle that contract in wave of peristalsis to move food through the terminal ileum and into the cecum.
- Finally, the serosa forms the outermost layer of the terminal ileum. Serosa is made of a smooth layer of simple squamous epithelial tissue and secretes a slippery liquid known as serous fluid. Serosa and serous fluid give the terminal ileum a slick, slimy surface to protect it from friction between organs and the walls of the abdominopelvic cavity.
If you liked this article about The terminal ileum, please share it:
Recommended articles: