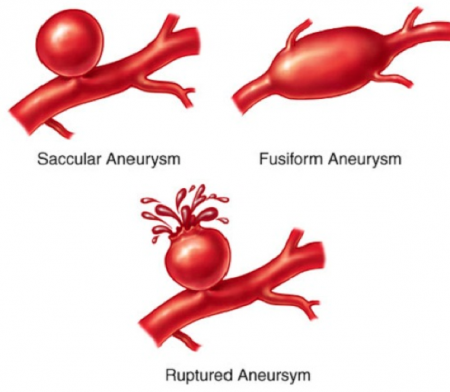 Aneurysm - is bulging of wall of the artery (rarely - of the vein) or heart due to its thinning or stretching. As a result develops so-called aneurysmal sac that can compress tissue disposed near. An aneurysm can be congenital. And, when a child birth, this defect is invisible, and the baby develops absolutely normally. To aneurysm also lead diseases, which thinning the blood vessels: hypertension, atherosclerosis, syphilis (late-stage). The risk of this insidious disease increases by trauma or injury of a blood vessel and during the formation of infected blood clots. With it people can live for years, make daily activities and have no symptoms. Meanwhile, the aneurysm will grow unnoticed, threatening at any moment to burst.

Aneurysm is often detected by chance during an ultrasound or X-ray examination. With identifying of its required urgent treatment because aneurysm rupture leads to hemorrhage, which is often fraught with death. At the moment of rupture of the aneurysm person feels pain, and his arterial pressure begins to fall rapidly due to the large loss of blood.

Despite the obvious danger of the disease, governments of many countries still do not pay enough attention to this problem. In the United States every year by an aneurysm die almost as many people as by AIDS (24 thousand people). At the same time for the fight against these diseases, respectively, is allocated 500 thousand dollars and 1.4 billion dollars. The sudden rupture of the aneurysm broke lives of such outstanding people as Albert Einstein, Charles de Gaulle.

It is believed that the acquired aneurysm is more common in patients older than 50 years. In young it usually develops as a result of injuries sustained in road crashes or extreme sports.

There are several types of the aneurysm.

Aneurysm of artery of the brain - the most common form of this disease. It is characterized by a local expansion of the brain arteries. In case of hemorrhage at rupture of the aneurysm is marked a sharp pain, a person loses consciousness. In half of the cases patients die, many of those who survived, remain disabled. Thus only 25 percent of patients with aneurysm before the fatal moment experience a headache similar to migraine. Often this disease is wrongly diagnosed as a brain tumor.

Aortic aneurysm - is a very dangerous disease. It can develop at different sections of this blood vessel. This diagnosis is detected for 50 thousand people a year, and by results of researches, aortic aneurysm is detected in 7 percent of the dead who died for another reason. In the later stages of the disease, patients complain of a pressure pain in one or another part of the body. There are aneurysm of the thoracic aorta, aneurysm of the aortic arch, a feature of which is that it can develop within 20 years after the injury. There is also an aneurysm of the abdominal aorta, which is often asymptomatic. However, very thin patients, putting a hand to stomach, could feel the pulsation and pain. If this aneurysm pushes roots of the spinal cord, the pain becomes unbearable.

With aneurysm of peripheral vessels (blood vessels of the extremities) patients may feel severe pain in the legs and arms.

Upon detection of any form of aneurysm is required surgical intervention. Essence of operation consists in excision of the damaged portion of the vessel and its replacement with plastic prosthesis or a fragment of a blood vessel from another part of the body.
If you liked this article about Aneurysm, please share it:
Recommended articles: