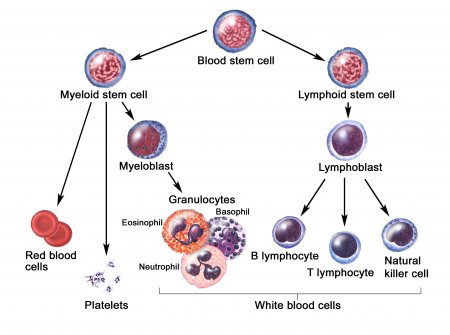 Acute lymphocytic (lymphoblastic) leukemia is a life-threatening disease in which cells normally developing in lymphocytes become malignant and quickly replace normal cells in the bone marrow.

Acute lymphocytic leukemia (ALL) occurs in patients of any age, but it is the most common type of children’s oncological disease and accounts for 25% of all cases of under 15 years old children’s cancer. ALL is the most commonly affected by young children (2 to 5 years). Among middle-aged people, this disease occurs a little more frequently than in patients older than 45 years.

With ALL, very immature leukemic cells accumulate in the bone marrow, destroying and replacing cells that produce normal blood cells. Leukemia cells are transported with blood to a liver, spleen, lymph nodes, brain and testes, where they can continue growing and divide. In this case, ALL cells can accumulate in any part of a body. They can affect the membranes covering the brain and spinal cord, causing inflammation (meningitis), leading to anemia, hepatic and renal failure, and other organ damage.

Symptoms of the acute lymphocytic leukemia

Early symptoms arise from the inability of the bone marrow to produce enough normal blood cells. Increased temperature and excessive sweating may indicate an infection. A high risk of infection is associated with too few normal leukocytes. Weakness, fatigue and paleness, indicating anemia, may appear due to an insufficient number of red blood cells. Rapid bruising and bleeding, sometimes in the form of nasal bleeding or bleeding from the gums, are caused by too few platelets. Leukemia cells in the brain can cause headaches, vomiting and irritability. Leukemia cells in the bone marrow can lead to pain in the bones and joints. If leukemia cells lead to an increase in the liver and spleen, a feeling of stomach overflow and, in some cases, pain may appear. Some patients may have heart palpitations and chest pain.

Diagnosis of the acute lymphocytic leukemia

The first signs of ALL can be detected with blood tests, such as a general blood test (a general blood test). The total number of leukocytes may be reduced, normal or elevated, but the number of red blood cells and platelets almost always turns down. In addition, in the study of blood samples under a microscope, very immature leukocytes (blasts) are often found.

In addition, blood and urine tests can be performed to identify other anomalies associated with ALL. Visual examinations may also be required. If a person has symptoms that make it possible to suspect the presence of leukemic cells in the brain, computer tomography (CT) or magnetic resonance imaging (MRI) is performed. To detect leukemia cells in the area around the lungs, a chest x-ray can be performed. With an increase in internal organs, CT, MRI or ultrasound examination of the abdominal cavity may be performed.

Treatment of the the acute lymphocytic leukemia

Chemotherapy is highly effective and consists of the following phases:
- Induction
- Consolidation with preventive therapy of the brain
- Intensification
- Supportive therapy

Induction chemotherapy is the first phase of treatment. The task of induction therapy is achieving a state of remission by destroying leukemia cells, which restores the ability of normal cells to develop in the bone marrow. In some cases, you need to stay in a hospital for several days (this depends on how quickly the bone marrow is restored). For the treatment of anemia and the prevention of bleeding, transfusion of blood and platelets may be required, and for the treatment of bacterial infections, the use of antibiotics. To help rid the body of harmful substances (such as uric acid) that are formed when leukemia cells are destroyed, intravenous fluid infusions and therapy with a drug called allopurinol can be performed.

One of several combinations of medicines is applied, the doses of which are repeated several days or weeks. The choice of a particular combination depends on the results of the diagnostic tests. One of the combinations consists of prednisone (corticosteroid) taken orally and weekly doses of vincristine (a chemotherapeutic drug) given together with an anthracycline (usually daunorubicin) preparation, asparaginase and sometimes cyclophosphamide, for intravenous administration. Studies of new drugs are underway.

These are followed by a consolidation phase that is designed to treat bone marrow disease, but since ALL often spreads to the brain, this phase also aims to treat leukemia that has already spread to the brain, or to prevent the spread of leukemia cells into the brain. To treat leukemia cells in layers of tissue covering the brain and spinal cord (meninges), drugs such as methotrexate, cytarabine, corticosteroids, or combinations thereof, which are usually injected directly into the cerebrospinal fluid, are used. Such chemotherapy can be carried out in combination with radiation therapy of the brain.

During the intensification phase (also called delayed intensification or intermediate maintenance therapy), other intensive care units are performed to destroy all remaining leukemia cells. Additional chemotherapeutic drugs or the same drugs as during the induction phase can be applied several times over a period that lasts for several weeks. Some patients with a high risk of recurrence due to certain chromosomal changes in the cells are often recommended stem cell transplantation (stem cell transplantation) during the first remission.

Further maintenance chemotherapy, which is usually the administration of fewer drugs (in some cases in smaller doses), usually continues for 2-3 years.
If you liked this article about Acute lymphocytic leukemia (ALL), please share it:
Recommended articles: