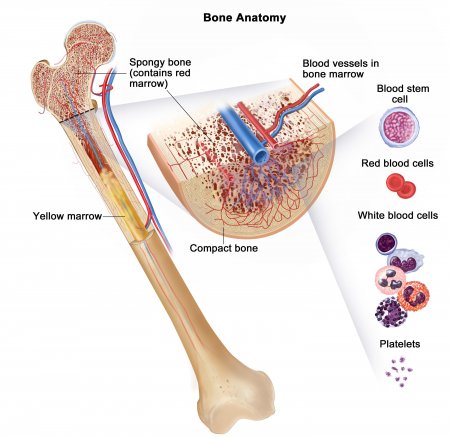 Acute myeloid leukemia (AML) is an oncological disease in which the spinal cord produces abnormal myeloblastic cells (the type of leukocyte cells), erythrocytes or platelets.

A number of factors that contributed to the onset of AML were identified - other disorders of the hematopoiesis system, exposure to harmful substances, ionizing radiation, and genetic influence.

The impact of benzene and other aromatic organic solvents associated with occupational activity as a possible cause of AML remains controversial. Benzene and many of its derivatives show carcinogenic properties. The data of some observations confirm the possibility of the influence of professional contacts with these substances on the likelihood of developing AML, but other studies confirm that if there is such a danger, it is only an additional factor.

The effect of ionizing radiation increases the likelihood of AML disease. In the survivors of the atomic bombing of Hiroshima and Nagasaki, the incidence of AML is increased, as well as in radiologists who received high doses of X-rays at time when radiological protection measures were inadequate.

Probably, there is a hereditarily increased probability of AML disease. There are a large number of reports of many family cases of AML, when the incidence rate exceeded the average. The probability of occurrence of AML in the nearest relatives of a patient is three times higher.

A number of congenital states can increase the likelihood of AML. Most often it is Down's syndrome, in which the probability of AML is increased 10 to 18 times.

The clinical picture of AML is well known and is manifested by the following syndromes: anemic, hemorrhagic and toxic and characterized by paleness of skin, severe weakness, dizziness, decreased appetite, increased fatigue, fever without manifestations of catarrhal phenomena.

Most patients have lymph nodes of small size, painless, not soldered to the skin and to each other. In rare cases, there are enlarged lymph nodes measuring 2.5 to 5 cm in size with the formation of conglomerates in the cervical-supraclavicular region. Changes of the osteoarticular system in some cases are manifested by pronounced ossalgies in the lower extremities and in a region of the vertebral column, which is accompanied by a disturbance of movements and gait. On the radiographs of the bone system, destructive changes of different localization, periosteal reactions, and osteoporosis are noted. Most children have a slight increase in the liver and spleen (protrude from under the edge of the costal arch by 2-3 cm).

Extramedullary tumor lesions are more often manifested by gingivitis and exophthalmos, including bilateral; In rare cases, there are tumor infiltration of soft tissues, hypertrophy of palatine tonsils, nasopharynx and facial nerve damage, as well as leukemids on the skin.

According to autopsy data, granulocyte (myeloblast) sarcoma is diagnosed in 3-8% of cases of patients with AML. It can be preceded or combined with signs of AML, characterized by blastic bone marrow infiltration and the presence of blasts in the peripheral blood, as well as observed with relapse of the disease. The most frequent localization of tumor growth is the orbit (the orbital tissue and internal structures of the skull are affected). Blastic cells are more often M2-type, having a translocation t (8; 21). A number of authors indicate a worse prognosis of these patients than with a typical AML.

The diagnosis of AML is established in more than 30% of cases of detection of blasts in the bone marrow. The blasts must have a morphological and cytochemical characterization of one of the FAB variants of AML.

An essential addition to the diagnosis of AML are immunophenotypic studies that specify standard morphological diagnostics and AML variants.

The most common and widely used to confirm the non-lymphoid nature of leukemia are the antigens CD13 and CD33, somewhat less commonly used CD65. The evaluation of these three markers confirms the myeloid nature of tumor cells in 98% of AML cases of children.

Treatment of patients with AML is based on the principle of maximum destruction of the leukemic cell clone. The main method of treatment of the disease is polychemotherapy. Currently, there are several areas in the treatment of AML, including both the use of new cytotoxic drugs, and the increase in doses of already known chemotherapy drugs. In addition to these already investigated and have become traditional methods of influencing the leukemic process there is experimental approaches using natural biologically active drugs which in some way affect the process of hematopoiesis (all germ factors, interleukins). Along with cytostatic agents, drugs that have a powerful modeling effect on the immune system (cyclosporine, antileukocyte immunoglobulin) are also being used. The use of growth factors in AML is currently debated in connection with the evidence that they can contribute to the proliferation of the tumor cell clone. At present, some researchers have demonstrated the possibility of using colony-stimulating factors (granocytosis, etc.) of patients with AML.

Modern programs for AML treatment consist of different stages - induction, consolidation, intensification and maintenance treatment during remission (lasting, as a rule, at least 2 years). At the same time, neuroleukemia is prevented by the endolumbal administration of chemotherapy drugs (cytosine arabinoside). In recent years, prophylactic remote gamma-therapy has become more widely used in the brain area.

When conducting induction and consolidation courses of chemotherapy, maximum intensification is required, which leads to the fastest achievement of complete remissions. The consequence of this treatment is bone marrow aplasia, during which, including a substitution, antibacterial and detoxication therapy dramatically increases the risk of infection and bleeding complications, and therefore patients need complex accompanying the treatment.

The main drugs included in the polychemotherapy programs used are combinations of cytosine arabinoside and anthracycline antibiotics. Until the 1980s, DAT schemes and "7 + 3" schemes were applied. Since the mid-80s etoposide began to be introduced into treatment programs, which led to a higher number of complete remissions and an increase in disease-free survival. The most effective treatment programs, including etoposide, are the BFM-83 and BFM-87 programs. Induction of remission comprises cytosine arabinoside, daunorubicin and etoposide, and consolidation - of vincristine, daunorubicin, cytosine arabinoside, 6-thioguanine, prednisolone, cyclophosphamide followed by maintenance therapy (cytosine arabinoside and 6-thioguanine to 104 weeks from the onset of remission). According to the BFM-87 study, the five-year event-free survival rate was 47%.

One way to intensify chemotherapy and achieve longer remissions is to increase the doses of cytosine arabinoside (up to 3000 mg / m2 every 12 hours).

In recent papers on the use of mitoxantrone in the treatment of AML children, particularly in patients with poor prognosis (M5, M7, M6, M4 without eosinophilia and inv (16), with M2 leukocytosis more 50h109 / l) and in relapsed disease. The most effective therapy was a combination of high doses of cytosar, mitoxantrone, etoposide. This therapy leads to severe myelodepression, without which it is impossible to achieve complete remission with AML, especially in patients with poor prognosis and relapses of the disease.

The data available to date show that, on the one hand, the intensification of chemotherapy has significantly increased the effectiveness of treatment, on the other, the number of adverse reactions and complications has increased, in some cases they are the cause of death of patients.

The direction of treatment associated with the use of differentiating agents, such as isomers of retinoic acid, has reached the greatest result in the therapy of acute promyelocytic leukemia (M3). When chromosomal aberration t (15; 17) corresponding M3 FAB, chromosome 17 break point involves gene corresponding alfaretinoevoy acid nuclear receptor, which enables recovery of the affected gene and promotes apoptosis of tumor cells by reducing the number of episodes of bleeding complications.
If you liked this article about Acute myeloid leukemia (AML), please share it:
Recommended articles: