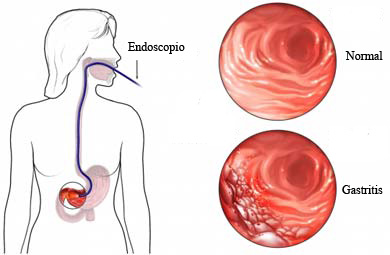 Gastritis describes a group of conditions with one thing in common: inflammation of the lining of the stomach. The inflammation of gastritis is most often the result of infection with the same bacterium that causes most stomach ulcers. Injury, regular use of certain pain relievers and drinking too much alcohol also can contribute to gastritis.

Gastritis may occur suddenly (acute gastritis), or it can occur slowly over time (chronic gastritis). In some cases, gastritis can lead to ulcers and an increased risk of stomach cancer. For most people, however, gastritis isn't serious and improves quickly with treatment.

Symptoms of the Gastritis
The signs and symptoms of gastritis include:

When to see a doctor
Nearly everyone has had indigestion and stomach irritation. Most cases of indigestion are short-lived and don't require medical care. See your doctor if you have signs and symptoms of gastritis for a week or longer. Tell your doctor if your stomach discomfort occurs after taking prescription or over-the-counter drugs, especially aspirin or other pain relievers.

If you are vomiting blood, have blood in your stools or have stools that appear black, see your doctor right away to determine the cause.

Causes of the gastritis
Gastritis is an inflammation of the stomach lining. Weaknesses in the mucus-lined barrier that protects your stomach wall allow your digestive juices to damage and inflame your stomach lining. A number of diseases and conditions can increase your risk of gastritis.

Gastritis can develop suddenly (acute gastritis) or gradually and last for an extended period (chronic gastritis).

Risk factors
Factors that increase your risk of gastritis include:

- Bacterial infection. Although infection with Helicobacter pylori is among the most common worldwide human infections, only some infected people develop gastritis or a similar stomach disorder. Doctors believe vulnerability to the bacterium could be inherited or could be caused by lifestyle choices, such as smoking and high stress levels.
- Regular use of pain relievers. Common pain relievers — such as aspirin, ibuprofen (Advil, Motrin IB, others) and naproxen (Aleve, Anaprox) — can cause both acute gastritis and chronic gastritis. Using these pain relievers regularly or taking too much of these drugs may reduce a key substance that helps preserve the protective lining of your stomach. Stomach problems are less likely to develop if you take pain relievers only occasionally. Acetaminophen (Tylenol, others) does not lead to gastritis.
- Older age. Older adults have an increased risk of gastritis because the stomach lining tends to thin with age and because older adults are more likely to have H. pylori infection or autoimmune disorders than younger people are.
- Excessive alcohol use. Alcohol can irritate your stomach lining, which makes your stomach more likely to be harmed by digestive juices. Excessive alcohol use is more likely to cause acute gastritis.
- Stress. Severe stress due to major surgery, injury, burns or severe infections can cause acute gastritis.
- Your own body attacking cells in your stomach. Called autoimmune gastritis, this type of gastritis occurs when your body attacks the cells that make up your stomach lining. This produces a reaction by your immune system that can wear away at your stomach's protective barrier. Autoimmune gastritis is more common in people with other autoimmune disorders, including Hashimoto's disease and type 1 diabetes. Autoimmune gastritis can also be associated with vitamin B-12 deficiency.
- Other diseases and conditions. Gastritis may be associated with other medical conditions, including HIV/AIDS, Crohn's disease and parasitic infections.

Tests and diagnosis of the gastritis
Although your doctor is likely to suspect gastritis after talking to you about your medical history and performing an exam, you may also have tests to pinpoint the exact cause. Tests may include:

- Tests for H. pylori. Your doctor may recommend tests to determine whether you have the bacterium H. pylori. Which type of test you undergo depends on your situation. H. pylori may be detected in a blood test, in a stool test or by a breath test. For the breath test, you drink a small glass of clear, tasteless liquid that contains radioactive carbon. H. pylori bacteria break down the test liquid in your stomach. Later, you blow into a bag, which is then sealed. If you're infected with H. pylori, your breath sample will contain the radioactive carbon.
- Using a scope to examine your upper digestive system (endoscopy). During endoscopy, your doctor passes a flexible tube equipped with a lens (endoscope) down your throat and into your esophagus, stomach and small intestine. Using the endoscope, your doctor looks for signs of inflammation. If a suspicious area is found, your doctor may remove small tissue samples (biopsy) for laboratory examination. A biopsy can also identify the presence of H. pylori in your stomach lining.
- X-ray of your upper digestive system. Sometimes called a barium swallow or upper gastrointestinal series, this series of X-rays creates images of your esophagus, stomach and small intestine to look for abnormalities. To make the ulcer more visible, you swallow a white, metallic liquid (containing barium) that coats your digestive tract.

Treatments and drugs
Treatment of gastritis depends on the specific cause. Acute gastritis caused by nonsteroidal anti-inflammatory drugs or alcohol may be relieved by stopping use of those substances. Chronic gastritis caused by H. pylori infection is treated with antibiotics.

In most cases, you also take medications that treat stomach acid to reduce your signs and symptoms and promote healing in your stomach.

Medications used to treat gastritis include:

- Antibiotic medications to kill H. pylori. For H. pylori in your digestive tract, your doctor may recommend a combination of antibiotics, such as clarithromycin (Biaxin) and amoxicillin or metronidazole (Flagyl), to kill the bacterium. Be sure to take the full antibiotic prescription, usually for 10 to 14 days.
- Medications that block acid production and promote healing. Proton pump inhibitors reduce acid by blocking the action of the parts of cells that produce acid. These drugs include the prescription and over-the-counter medications omeprazole (Prilosec), lansoprazole (Prevacid), rabeprazole (Aciphex), esomeprazole (Nexium), dexlansoprazole (Dexilant) and pantoprazole (Protonix). Long-term use of proton pump inhibitors, particularly at high doses, may increase your risk of hip, wrist and spine fractures. Ask your doctor whether a calcium supplement may reduce this risk.
- Medications to reduce acid production. Acid blockers — also called histamine (H-2) blockers — reduce the amount of acid released into your digestive tract, which relieves gastritis pain and promotes healing. Available by prescription or over-the-counter, acid blockers include ranitidine (Zantac), famotidine (Pepcid), cimetidine (Tagamet) and nizatidine (Axid).
- Antacids that neutralize stomach acid. Your doctor may include an antacid in your drug regimen. Antacids neutralize existing stomach acid and can provide rapid pain relief. Side effects can include constipation or diarrhea, depending on the main ingredients.
If you liked this article about The Gastritis, please share it:
Recommended articles: