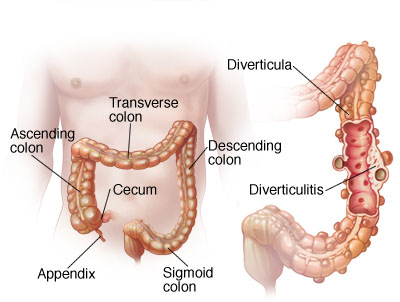 Diverticula are small, bulging pouches that can form in the lining of your digestive system. They are found most often in the lower part of the large intestine (colon). Diverticula are common, especially after age 40, and seldom cause problems.

Sometimes, however, one or more of the pouches become inflamed or infected. That condition is known as diverticulitis. Diverticulitis can cause severe abdominal pain, fever, nausea and a marked change in your bowel habits.

- Pain, which may be constant and persist for several days. Pain is usually felt in the lower left side of the abdomen, but may occur on the right, especially in people of Asian descent.
- Nausea and vomiting.
- Fever.
- Abdominal tenderness.
- Constipation or, less commonly, diarrhea.

Causes of the diverticulitis
Diverticula usually develop when naturally weak places in your colon give way under pressure. This causes marble-sized pouches to protrude through the colon wall.

Diverticulitis occurs when diverticula tear, resulting in inflammation or infection or both.

Tests and diagnosis of the diverticulitis
Diverticulitis is usually diagnosed during an acute attack. Because abdominal pain can indicate a number of problems, your doctor will need to rule out other causes for your symptoms.

Your doctor will likely start with a physical examination, including checking your abdomen for tenderness. Women, in addition, generally have a pelvic examination to rule out pelvic disease.

After that, your doctor will likely recommend: