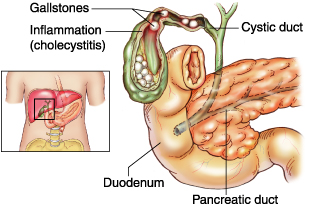 Different types of gallstones form in cholelithiasis. The most common type, called a cholesterol stone, results from the presence of too much cholesterol in the bile. Another type of stone, called a pigment stone, is formed from excess bilirubin, a waste product created by the breakdown of the red blood cells in the liver. The size and number of gallstones varies in cholelithiasis; the gallbladder can form many small stones or one large stone.

Symptoms of the cholelithiasis
Cholelithiasis may cause irritation and inflammation of the gallbladder (cholecystitis) that can result in a number of symptoms. The symptoms can vary in intensity among individuals.

Common symptoms of cholelithiasis
You may experience cholecystitis symptoms daily or just once in a while. At times, any of these common symptoms can be severe:

- Abdominal pain (typically localized to the right upper quadrant of the abdomen)
- Abdominal swelling, distension or bloating
- Abdominal tenderness
- Clay-colored stools
- Fever and chills
- Loss of appetite
- Nausea with or without vomiting
- Pain that radiates from the abdomen to the right shoulder or back
- Sweating
- Yellowing of the skin and whites of the eyes (jaundice).

Some gallstones develop because the bile contains too much bilirubin, a waste product of the liver that is a component of bile. Gallstones that develop from excess bilirubin are called pigment stones.