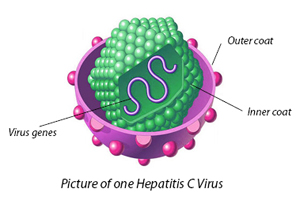 Until recently, hepatitis C treatment required weekly injections and oral medications that many HCV-infected people couldn't take because of other health problems or unacceptable side effects.

That's changing. Today, chronic HCV is usually curable with oral medications taken every day for two to six months. Still, about half of people with HCV don't know they're infected, mainly because they have no symptoms, which can take decades to appear. For that reason, the U.S. Centers for Disease Control and Prevention recommends a one-time screening blood test for everyone at increased risk of the infection. The largest group at risk includes everyone born between 1945 and 1965 — a population five times more likely to be infected than those born in other years.

Symptoms of the Hepatitis C
Long-term infection with the hepatitis C virus (HCV) is known as chronic hepatitis C. Chronic hepatitis C is usually a "silent" infection for many years, until the virus damages the liver enough to cause the signs and symptoms of liver disease. Among these signs and symptoms are:
- Bleeding easily
- Bruising easily
- Fatigue
- Poor appetite
- Yellow discoloration of the skin and eyes (jaundice)
- Dark-colored urine
- Itchy skin
- Fluid buildup in your abdomen (ascites)
- Swelling in your legs
- Weight loss
- Confusion, drowsiness and slurred speech (hepatic encephalopathy)
- Spider-like blood vessels on your skin (spider angiomas)

Every chronic hepatitis C infection starts with an acute phase. Acute hepatitis C usually goes undiagnosed because it rarely causes symptoms. When signs and symptoms are present, they may include jaundice, along with fatigue, nausea, fever and muscle aches. Acute symptoms appear one to three months after exposure to the virus and last two weeks to three months.

Causes of the Hepatitis C
Hepatitis C infection is caused by the hepatitis C virus. The infection spreads when blood contaminated with the virus enters the bloodstream of an uninfected person.

Globally, HCV exists in several distinct forms, known as genotypes. The most common HCV genotype in North America and Europe is type 1. Type 2 also occurs in the United States and Europe, but is less common than type 1. Both type 1 and type 2 have also spread through much of the world, although other genotypes cause a majority of infections in the Middle East, Asia and Africa.

Although chronic hepatitis C follows a similar course regardless of the genotype of the infecting virus, treatment recommendations vary depending on viral genotype.