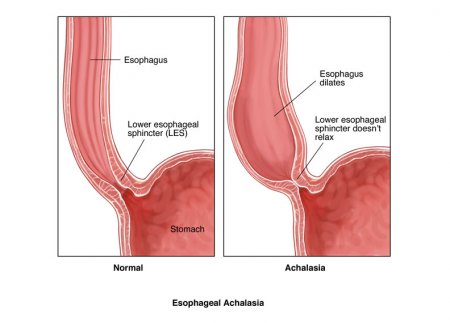 Achalasia is a rare disease of the muscle of the esophagus (swallowing tube). The term achalasia means "failure to relax" and refers to the inability of the lower esophageal sphincter (a ring of muscle situated between the lower esophagus and the stomach) to open and let food pass into the stomach. As a result, people with achalasia have difficulty swallowing food. In addition to the failure to relax, achalasia is associated with abnormalities of esophageal peristalsis (usually complete absence of peristalsis), the coordinated muscular activity of the body of the esophagus (which comprises 90% of the esophagus) that transports food from the throat to the stomach.

Symptoms of the achalasia
The symptoms of achalasia include:
- Difficulty swallowing food
- Difficulty swallowing both solid and liquid food
- Regurgitation of food that is retained in the esophagus. If this happens at night, food may be aspirated into the lungs, a serious medical problem
- Chest discomfort from esophageal dilation and/or retained food
- Sharp chest pain usually of unclear cause
- Heartburn; however, the heartburn is not characteristic of heartburn and is not helped by treatment for heartburn
- Loss of weight due to reduced intake of food

Causes of the achalasia
The cause of achalasia is unknown. Theories on causation invoke infection, heredity or an abnormality of the immune system that causes the body itself to damage the esophagus (autoimmune disease).

The esophagus contains both muscles and nerves. The nerves coordinate the relaxation and opening of the sphincters as well as the peristaltic waves in the body of the esophagus. Achalasia has effects on both the muscles and nerves of the esophagus; however, the effects on the nerves are believed to be the most important. Early in achalasia, inflammation can be seen (when examined under the microscope) in the muscle of the lower esophagus, especially around the nerves. As the disease progresses, the nerves begin to degenerate and ultimately disappear, particularly the nerves that cause the lower esophageal sphincter to relax. Still later in the progression of the disease, muscle cells begin to degenerate, possibly because of the damage to the nerves. The result of these changes is a lower sphincter that cannot relax and muscle in the lower esophageal body that cannot support peristaltic waves. With time, the body of the esophagus stretches and becomes enlarged (dilated).

Diagnosis of the achalasia
The diagnosis of achalasia often is suspected on the basis of the history. Patients usually describe a progressive (worsening) of swallowing (dysphagia) for solid and liquid food over a period of many months to years. They may note regurgitation of food, chest pain, or loss of weight. Rarely, the first symptom is aspiration pneumonia.

Because patients typically learn to compensate for their dysphagia by taking smaller bites, chewing well, and eating slowly, the diagnosis of achalasia often is delayed by months or even years. The delay in diagnosis of achalasia is unfortunate because it is believed that early treatment-before marked dilation of the esophagus occurs-can prevent esophageal dilation and its complications.

Another test, esophageal manometry, can demonstrate specifically the abnormalities of muscle function that are characteristic of achalasia, that is, the failure of the muscle of the esophageal body to contract with swallowing and the failure of the lower esophageal sphincter to relax. For manometry, a thin tube that measures the pressure generated by the contracting esophageal muscle is passed through the nose, down the back of the throat and into the esophagus. In a patient with achalasia, no peristaltic waves are seen in the lower half of the esophagus after swallows, and the pressure within the contracted lower esophageal sphincter does not fall with the swallow. In patients with vigorous achalasia, a strong simultaneous contraction of the muscle may be seen in the lower esophageal body. An advantage of manometry is that it can diagnose achalasia early in its course at a time at which the video-esophagram may be normal.

Endoscopy also is helpful in the diagnosis of achalasia although it can be normal early in achalasia. Endoscopy is a procedure in which a flexible fiberoptic tube with a light and camera on the end is swallowed. The camera provides direct visualization of the inside of the esophagus. One of the earliest endoscopic findings in achalasia is resistance as the endoscope is passed from the esophagus and into the stomach due to the high pressure in the lower esophageal sphincter. Later, endoscopy may reveal a dilated esophagus and a lack of peristaltic waves. Endoscopy also is important because it excludes the presence of esophageal cancer and other causes of dysphagia.

There is no specific diet for treating achalasia, though dietary alterations often are made by patients as they learn what foods seem to pass more easily. Usually, the more liquid foods pass more easily, and patients sometimes drink more water with their meals. Early in the progression of the disease they may find that carbonated liquids help food pass, probably because of the increased intra-esophageal pressure caused by the carbonation that "pushes" food through the sphincter. If loss of weight is substantial it is reasonable to supplement food with a liquid diet supplement that is complete, i.e., contains all necessary nutrients, to prevent malnutrition.

Oral medications that help to relax the lower esophageal sphincter include groups of drugs called nitrates, for example, isosorbide dinitrate (Isordil) and calcium channel blockers (CCBs), for example, nifedipine (Procardia) and verapamil (Calan). Although some patients with achalasia, particularly early in the disease, have improvement of symptoms with medications, most do not. By themselves, oral medications are likely to provide only short-term and not long-term relief of the symptoms of achalasia, and many patients experience side-effects from the medications.

Another treatment for achalasia is the endoscopic injection of botulinum toxin into the lower sphincter to weaken it. Injection is quick, nonsurgical, and requires no hospitalization. Treatment with botulinum toxin is safe, but the effects on the sphincter often last only for months, and additional injections with botulinum toxin may be necessary. Injection is a good option for patients who are very elderly or are at high risk for surgery, for example, patients with severe heart or lung disease. It also allows patients who have lost substantial weight to eat and improve their nutritional status prior to "permanent" treatment with surgery. This may reduce post-surgical complications.
If you liked this article about Achalasia, please share it:
Recommended articles: