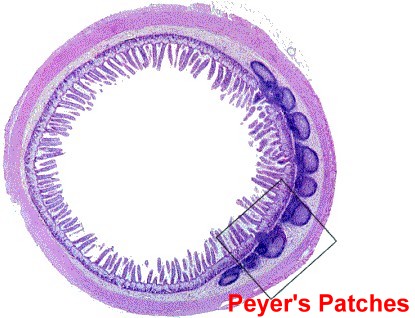 Peyer’s patches are small masses of lymphatic tissue found throughout the ileum region of the small intestine. Also known as aggregated lymphoid nodules, they form an important part of the immune system by monitoring intestinal bacteria populations and preventing the growth of pathogenic bacteria in the intestines.

The function of Peyer’s patches is to analyze and respond to pathogenic microbes in the ileum. Antigens from microbes in the gut are absorbed via endocytosis by microfold cells lining the surface of each Peyer’s patch. These antigens are passed on to the lymphoid tissue, where they are absorbed by macrophages and presented to T lymphocytes and B lymphocytes. When presented with dangerous pathogenic antigens, lymphocytes trigger the immune response by producing pathogen-specific antibodies; turning into pathogen-killing cytotoxic T lymphocytes; and migrating through lymphatic vessels to lymph nodes to alert the other cells of the immune system. The body then prepares a full body-wide immune response to the pathogen before it is able to spread beyond the intestines.
If you liked this article about The Peyer’s patches, please share it:
Recommended articles: