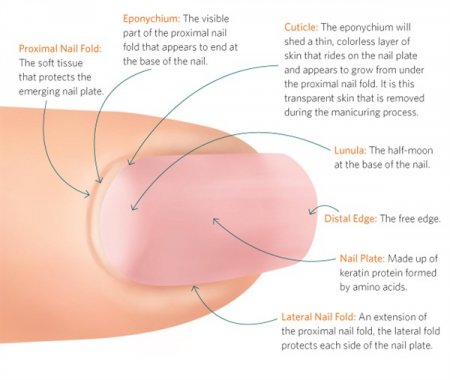 The fingernails are a sort of envelope composed of keratin, a tough protein, which cover the top of the terminal phalanges of a person's fingers. Nails are similar to the claws that can be found in other animals. Each nail is made up of a nail plate—this is the top of the nail. It is also made up of the nail matrix, a thin layer of tissue upon which the nail plate rests and the site of the cells that eventually become the nail plate. Each nail also has a nail bed—a layer of skin that connects the nail matrix to the hand. And lastly, each nail has the grooves that surround the nail matrix.

Nails protect the tissues that they cover from injury. They also enhance the delicate movement of fingertips and the sensitivity of the fingertips, although the nail itself has no nerve endings. The nail is an opposing force to the fingertip. It allows the fingertip to receive even more sensory input after it touches an object. Fingernails usually grow at a faster rate than toenails. Nails grow more quickly in higher temperatures. Since fingernails are usually exposed, they receive more light and therefore more warmth and air, which quickens their growth rate.
If you liked this article about The fingernails, please share it:
Recommended articles: