Development of the skeleton

Bone tissue develops from the mesenchyme. At the end of the 1st month of fetal development are formed clusters of mesenchyme, which form the membrane models for future bones. This is stage of development of membranous bones. From 2nd month cells begin to produce chondrin and comes cartilage stage. With 6-7 weeks begins bone stage of development of bones. But the bones of the cranial vault, the bones of the face, medial plate of pterygoid process, the middle part of the clavicle in their development have no cartilage stage and are called primary bones. With the development of bone by the direct (membranous) ossification in young connective tissue (mainly in the center of the future bone) appears one or more points of the ossification. Point of the ossification consists of the osteoblasts (young bone cells ), placed in the form of beams. Beams grow, forming a skeletal grid, in loops of which are located bone marrow cells and blood vessels. Osteoblasts produce intercellular substance in which are deposited salts of calcium. Gradually osteoblasts transformed to osteocytes (mature bone cells), are formed the inner and outer plates of compact bone substance, sponge substance, surface layers of connective tissue are converted to the periosteum. The bones of the trunk, limbs, skull base develop on the site of cartilage and are called secondary bones. With the development of the bone by indirect ossification, the bone formation can occur on the periphery of the cartilage - perichondral ossification, or from the middle of cartilage - enchondral ossification.

Ossification of long tubular bones in the area of diaphysis carried by perichondral and enchondral way. The first point of ossification appears in the center of cartilage model of bone on the 8th week of embryogenesis.

Development of the limb bones 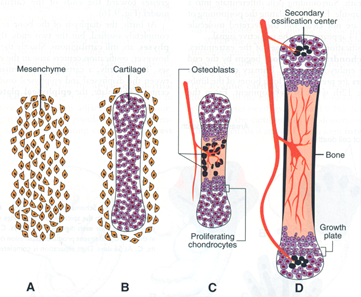 Limb bones develop from sclerotome and pass all three stages of development. On the 4th week appear outgrowths of the mesenchyme - the beginnings of future limb bones. A special feature is the fact that first are formed the beginnings of forearm bones and lower leg, and then - beginnings of shoulder and hip.

The facial skull develops with gill arches. From the 1st gill arch are formed maxillary and mandibular processes and the frontal bone. From the maxillary processes develop the upper jaw, zygomatic bones, palatine bones, medial plate of the pterygoid processes; from mandibular processes - the lower jaw; from frontal bone - lemish perpendicular to the plate of lattice bone, ethmoid labyrinth, nasal and lacrimal bones. The base of the skull passes all three stages of development; cranial vault has no cartilage stage of development. But a newborn baby has yet connective tissue sections of the cranial vault - fontanel:
- Anterior fontanel - the largest fontanel, has a rhomboid shape, is located between the two parts of the frontal bone and parietal bones, overgrown in the 2nd year of life;
- Back (occipital) fontanel - triangular shape, is located between the parietal bone and occipital bone, overgrown on 2nd months of life;
- Wedge-shaped fontanel - is located at the junction of the large wing of sphenoid bone with the frontal bone, parietal and temporal bones, overgrown on 2-3 th month of life;
- Mastoid fontanel - paired, is located between the temporal, parietal and occipital bones; overgrown on 2-3 th month of life.
If you liked this article about Development of the skeleton, please share it:
Recommended articles: