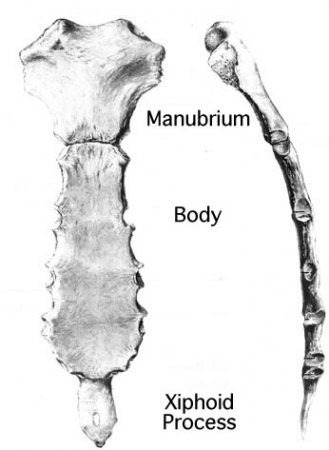 The sternum, commonly known as the breastbone, is a long, narrow flat bone that serves as the keystone of the rib cage and stabilizes the thoracic skeleton. Several muscles that move the arms, head, and neck have their origins on the sternum. It also protects several vital organs of the chest, such as the heart, aorta, vena cava, and thymus gland that are located just deep to the sternum.

The sternum is located along the body’s midline in the anterior thoracic region just deep to the skin. It is a flat bone about six inches in length, around an inch wide, and only a fraction of an inch thick. The sternum develops as three distinct parts: the manubrium, the body of the sternum (sometimes called the gladiolus), and the xiphoid process. The shape of the sternum looks somewhat like a sword pointing downwards, with the manubrium forming the handle, the body forming the blade, and the xiphoid process forming the tip. In fact, the name manubrium means “handle,” gladiolus means “sword,” and xiphoid means “sword-shaped.”

The manubrium is the widest and most superior region of the sternum. It forms joints with the clavicles and the first and second pairs of ribs through their costal cartilages. The clavicles meet the manubrium at the concave clavicular notches to form the sternoclavicular joint, the only point of skeletal attachment between the pectoral girdle of the shoulder and the axial skeleton of the thorax. Slight indentations on the lateral sides of the manubrium provide attachment points for the costal cartilages of the ribs. At its inferior end, the manubrium meets the body of the sternum at the joint with the costal cartilage of the second ribs. Here it forms the sternal angle, a slight posterior bend in the sternum that can be felt through the skin and serves as an important anatomical landmark in the medical profession. Several important muscles attach via tendons to the manubrium, including the sternocleidomastoid, pectoralis major, sternohyoid, and sternothyroid muscles.

Several undesired events can take place at the sternum. During open heart surgery, the sternum must be cut in half along its long axis to provide access to the heart. After surgery, the two halves of the sternum must be wired back together with stainless steel wire to prevent their separation. Any extreme stresses placed on the broken sternum after surgery, such as lifting heavy objects, can result in the wires cutting through the bony tissue and severely damaging the sternum. Another risk associated with the sternum is the fracturing of the xiphoid process during CPR, which can potentially lead to the xiphoid process breaking off and lodging into one of the delicate vital organs below it.
If you liked this article about The sternum, please share it:
Recommended articles: