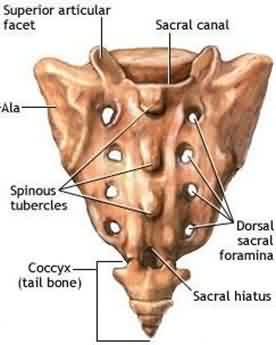 The coccyx, or tailbone, is both the smallest and the most inferior bone in the spinal column. It is a vestige of the caudal vertebrae found in the tails of most mammals. In the human body, the coccyx functions to anchor several muscles of the pelvic region and acts as one of the bones that bear the body’s weight while sitting.

The coccyx is a small, triangular bone measuring less than one inch (2.5 cm) in length and curved like a hawk’s beak. It is widest at its superior border, where it meets the sacrum, and is narrowest at its inferior tip. The coccyx is curved to form a concave surface anteriorly that is continuous with the curvature of the sacrum. In men the concavity is greater, while in females the concavity is reduced so that the coccyx does not point as anteriorly as it does in the male skeleton. A thin band of fibrocartilage binds the coccyx to the sacrum above it while permitting slight flexion and extension of the coccyx. Two bony spines known as cornua extend superiorly toward the sacrum on the posterior side and are connected to the sacral cornua by ligaments.

Four tiny individual vertebrae make up the coccyx in most individuals; however, it may rarely be formed from either three or five bones. Each vertebra displays tiny transverse processes that extend laterally and tiny articular processes that extend superiorly. At birth, the coccyx begins as a mass of cartilage attached to the end of the sacrum, and slowly ossifies as individual bones. Each bone ossifies in order from superior to inferior until all are ossified by the end of puberty. The individual bones also fuse together to form a single coccyx throughout adulthood. In some individuals, the bones may only partially fuse, resulting in the coccyx consisting of two separate bones.

In addition to its role in muscle attachment, the coccyx also plays an important role in support of the spinal cord, support of the body, and in childbirth. The filum terminale, an extension of the meninges at the inferior end of the spinal cord, is attached to the coccyx and uses the coccyx as an anchor for the spinal cord. When sitting down, the body’s weight rests on the two ischium bones of the pelvis anteriorly and on the coccyx posteriorly like a tripod. Finally, the coccyx extends posteriorly during childbirth to provide more space for the fetal head to pass through the birth canal. This flexion explains the sexual dimorphism seen between the male coccyx, which points anteriorly, and the female coccyx, which points more inferiorly to provide extra space for the fetus.
If you liked this article about The coccyx, please share it:
Recommended articles: