The bones of the hand and wrist 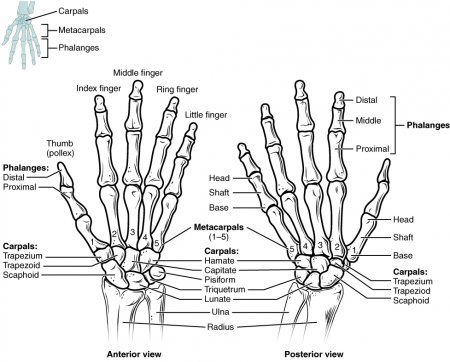 The bones of the hand and wrist provide the body with support and flexibility to manipulate objects in many different ways. Each hand contains 27 distinct bones that give the hand an incredible range and precision of motion. The forearm's ulna and radius support the many muscles that manipulate the bones of the hand and wrist. Rotation of the radius around the ulna results in the supination and pronation of the hand. These bones also form the flexible wrist joint with the proximal row of the carpals.

There are eight small carpal bones in the wrist that are firmly bound in two rows of four bones each. The mass that results from these bones is called the carpus. The carpus is rounded on its proximal end, where it articulates with the ulna and radius at the wrist. The carpus is slightly concave on the palmar side, forming a canal known as the carpal tunnel through which tendons, ligaments, and nerves extend into the palm. Its distal surface articulates with the metacarpal bones, which are joined to the carpus by the palmar carpometacarpal ligaments.