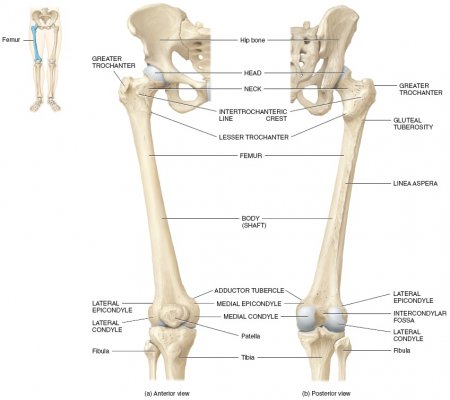 The femur, or thigh bone, is the longest, heaviest, and strongest bone in the entire human body. All of the body’s weight is supported by the femurs during many activities, such as running, jumping, walking, and standing. Extreme forces also act upon the femur thanks to the strength of the muscles of the hip and thigh that act on the femur to move the leg. The femur is classified structurally as a long bone and is a major component of the appendicular skeleton.

On its proximal end, the femur forms a smooth, spherical process known as the head of the femur. The head of the femur forms the ball-and-socket hip joint with the cup-shaped acetabulum of the coxal (hip) bone. The rounded shape of the head allows the femur to move in almost any direction at the hip, including circumduction as well as rotation around its axis. Just distal from the head, the femur narrows considerably to form the neck of the femur. The neck of the femur extends laterally and distally from the head to provide extra room for the leg to move at the hip joint, but the thinness of the neck provides a region that is susceptible to fractures.

At the end of the neck, the femur turns about 45 degrees and continues distally and slightly medially toward the knee as the body of the femur. At the top of the body of the femur on the lateral and posterior side is a large, rough bony projection known as the greater trochanter. Just medial and distal to the greater trochanter is a smaller projection known as the lesser trochanter. The greater and lesser trochanters serve as a muscle attachment sites for the tendons of many powerful muscles of the hip and groin such as the iliopsoas group, gluteus medius, and adductor longus. The trochanters also widen and strengthen the femur in a critical region of high stresses due to external trauma and the force of muscle contractions.

Hip joint replacement
A hip joint replacement is an osteopathic surgical intervention that replaces a damaged hip joint with a prosthetic (artificial) joint. Hip replacements are commonly indicated as treatments for osteoarthritis of the hip joint or severe fracturing of the hip as a result of trauma. Many different materials and designs have been used for artificial hips, with medical research continuing to search for the most robust and longest lasting design.

The hip joint is a ball-and-socket joint formed between the head of the femur and the acetabulum of the hip bone. On the femoral end, the head of the femur is a smooth, spherical joint-forming process that extends from the proximal end of the femur via a narrow neck of bone. The acetabulum is a deep, cup-like socket in the hip bone that forms at the union of the ilium, ischium and pubis. The round shapes of the head and acetabulum enable the femur to circumduct in a complete circle around the hip joint, as well as rotate around the axis of the joint. Both the head of the femur and acetabulum are covered in hyaline cartilage to reduce friction at the joint and to act as a shock absorber during weight-bearing activities. Slick synovial fluid fills a small space between the layers of hyaline cartilage, providing lubrication to the joint and preventing its premature wear. Many ligaments and strong muscles surround the hip to hold the bones firmly in place and prevent the dislocation of the joint.

The most common cause for a hip replacement is osteoarthritis, where the cartilage covering the surface of the bones wears away from friction in the joint over many years of use. Once cartilage wears out, the surfaces of the bones rub against each another, leading to the pain, swelling and irritation associated with arthritis. Bone spurs begin to grow from the exposed bone, leading to irregular bone shapes and increased friction, pain and irritation. Traumatic accidents where the bones of the hip joint are fractured and lose their normal anatomical shape may also require a hip replacement to restore function to the joint.

During hip replacement surgery, the head and neck of the femur are removed and a metal stem is inserted into the hollow medullary cavity of the femur. The stem may be made of stainless steel, titanium or vitallium, and may either be cemented into place or covered with a rough surface that encourages the surrounding bone to grow into the metal and hold it in place. Some prosthetic designs include a metal head piece on the stem, while others use a separate head that is attached to the stem. The head may be made of metal like the stem or may be made of a smooth, high-strength ceramic material. In either case, the head is made to be incredibly smooth to reduce friction within the joint.

On the hip bone side of the joint, the acetabulum is abraded to give it a regular shape large enough to accept a rounded prosthesis. The prosthetic acetabulum is a metal cup surrounding a polyethylene plastic insert. Once the surface is prepared, the prosthesis is mounted to the hip bone by screws. It may either be cemented in place, or bone may be allowed to grow into pores on its surface. The growth of bone into the prosthesis is preferred in patients with strong, healthy bone, while the cement is preferable for patients with poor bone growth. The polyethylene insert is also shaped like a cup and surrounds the prosthetic head of the femur to hold the joint together and allow for a full range of movement at the joint. Plastic is an ideal material for the insert, as it simulates the function of cartilage by being smooth, tough and flexible enough to act as a shock absorber.

Despite the advanced materials used in modern hip replacements, there are several common complications that impact the long-term results of the surgery. One negative outcome is an increased possibility of dislocation of the joint following surgery, due to injury to the soft tissues that reinforce the joint. Another is the weakening of the bone surrounding the joint in response to the artificial materials. Finally, the materials of the prosthesis itself are likely to wear over time, leading to further surgery to replace them. Surgeons and medical researchers continue to work toward solutions to these problems and the creation of an ideal replacement joint.