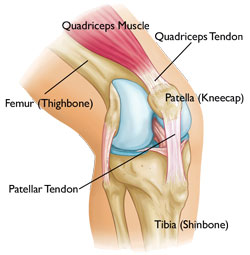 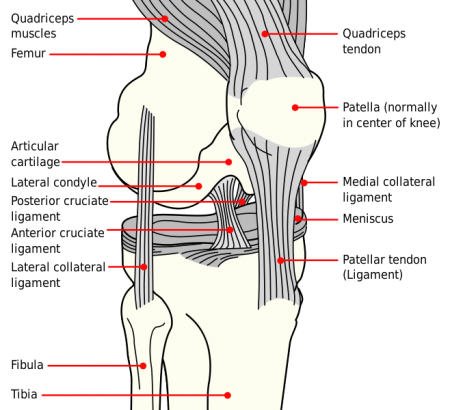 The patellar ligament is a band of connective tissue that connects the patella, or kneecap, to the tibia. It forms a vital link in the musculoskeletal system of the lower limb and occasionally is the site of joint injury.

A tear or rupture of the patellar ligament may result from stress to the ligament from jumping or from the impact during a fall. A partial tear will result in pain and irritation in the joint, and should be treated with rest or physical therapy. Complete tears result in the patella dislocating proximally toward the thigh and disabling the function of the knee. The only treatment for a complete tear is surgical reattachment of the ligament followed by rest and physical therapy. 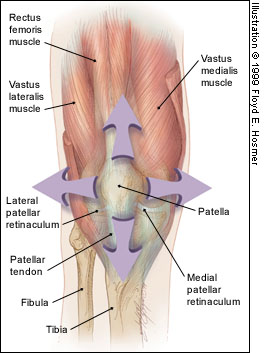 The lateral patellar retinaculum, or canal, in the patella, allows muscle and tissue to pass through from the femur (thigh bone). The patellar ligament is the center of the common tendon, which continues from the patella (knee cap) to the tibia. It is a very strong, flat band, the fibers of which are continuous over the front of the patella with tendons that extend and pass down the sides of the patella into the extremity of the tibia along the sides of its rounded prominence. It is separated from the joint by a large padding of fat. 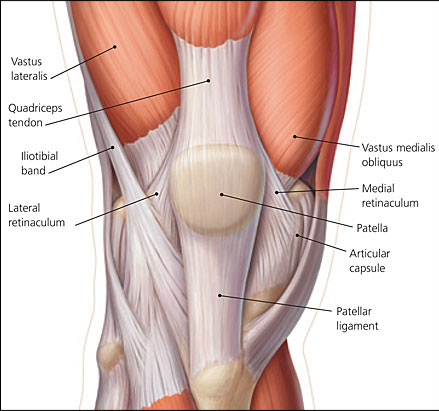 Like all other tendons, the medial patellar retinaculum is made of dense regular connective tissue. Many strong collagen fibers in this tissue are arranged in a regular pattern with their long axis running vertically. The result is an incredibly strong tissue in the vertical axis, although strength is sacrificed in other directions. Between the collagen fibers are some elastin fibers to provide elasticity to the tissue, as well as fibroblast cells that produce new collagen fibers to replace broken and worn out fibers.

1. It forms part of the fibrous capsule of the knee.
2. It serves as the insertion of the vastus medialis on the tibia.

The fibrous capsule of the knee protects the delicate synovial membrane inside and seals the lubricating synovial fluid within the joint capsule. It also helps to maintain the proper position of the bones within the knee to prevent injury and premature wear. The medial patellar retinaculum fills in the gap between the patella, patellar ligament, and medial collateral ligament to seal the fibrous capsule.

Acting as a tendon of insertion, the medial patellar retinaculum forms the connection of the vastus medialis to the medial condyle of the tibia. Contraction of the vastus medialis extends the leg at the knee by pulling on the medial patellar retinaculum, which in turn pulls the tibia anteriorly and straightens the knee. This motion is assisted by the contraction of the other muscles of the quadriceps femoris group, which simultaneously pull on the tibia to extend the knee.
If you liked this article about The patella, please share it:
Recommended articles: