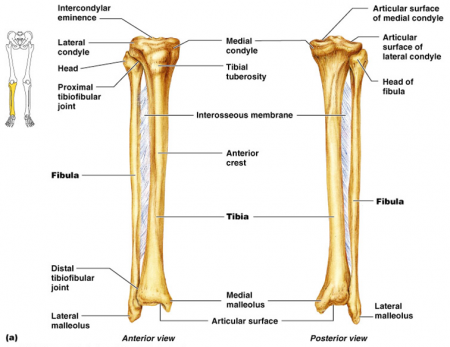 The fibula is the long, thin and lateral bone of the lower leg. It runs parallel to the tibia, or shin bone, and plays a significant role in stabilizing the ankle and supporting the muscles of the lower leg. Compared to the tibia, the fibula is about the same length, but is considerably thinner. The difference in thickness corresponds to the varying roles of the two bones; the tibia bears the body’s weight from the knees to the ankles, while the fibula merely functions as a support for the tibia.

While the fibula moves very little relative to the tibia, the joints that it forms contribute significantly to the function of the lower leg. The proximal and distal tibiofibular joints permit the fibula to adjust its position relative to the tibia, increasing the range of motion of the ankle. The lateral malleolus also forms the lateral wall of the talocrural joint and reinforces the ankle joint.

Many muscles of the thigh and lower leg attach to the fibula through tendons. One of the hamstrings, the biceps femoris muscle, has its insertion at the head of the fibula and pulls on the fibula to flex the leg at the knee. Eight other muscles – including the three fibularis (peroneus) muscles, the soleus, and several flexors and extensors of the toes – have their origins on the fibula as well.

An interesting fact about the fibula is that it can be harvested for tissue to graft onto other bones in the body. The fibula bears so little body weight that it typically has more bone mass than is needed to support the leg, making it a good tissue donor. The bony tissue harvested from the fibula is most commonly grafted onto the mandible to replace bone lost during oral cancer surgery. Skin and blood vessels covering the fibula are grafted along with the osseous (bone) tissue to maintain blood supply to the bone and to close the wound in the face. The remaining tissue in the leg can be sutured together to heal around the donor site.

A collateral ligament is made up of several thick bands of fibrous branches. A ligament is a tough band of white, fibrous, slightly elastic tissue. This is an essential part of the skeletal joints; binding the bone ends together to prevent dislocation and excessive movement that might cause breakage. Ligaments, especially those in the knee, are sometimes damaged by injury. A torn ligament usually results from twisting stress when the knee is turned while weight is on that particular leg. Minor sprains are treated with ice, bandages and sometimes physical therapy, but if the ligament is torn, the joint may be placed in a plaster cast to allow time to heal or it may require surgical repairs. The word ligament comes from the Latin word, ligamentum, meaning a band or tie.
If you liked this article about The fibula, please share it:
Recommended articles: