Processing, Please wait...
Human anatomy » Musculoskeletal system » The muscles of the chest and upper back

The muscles of the chest and upper back 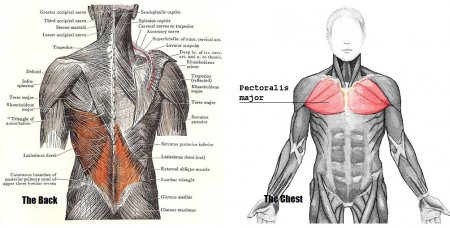 The muscles of the chest and upper back occupy the thoracic region of the body inferior to the neck and superior to the abdominal region and include the muscles of the shoulders. These important muscles control many motions that involve moving the arms and head – such as throwing a ball, looking up at the sky, and raising your hand. Breathing, a vital body function, is also controlled by the muscles connected to the ribs of the chest and upper back.

The bones of the pectoral girdles, consisting of the clavicle (collar bone) and scapula (shoulder blade), greatly increase the range of motion possible in the shoulder region beyond what would be possible with the shoulder joint alone. The muscles of this region both allow for this range of motion and contract to stabilize this region and prevent any extraneous motion. On the anterior side of the thoracic region, the pectoralis minor and serratus anterior muscles originate on the anterior ribs and insert on the scapula. These muscles work together to move the scapula anteriorly and laterally during pushing, throwing, or punching motions. In the upper back region, the trapezius, rhomboid major, and levator scapulae muscles anchor the scapula and clavicle to the spines of several vertebrae and the occipital bone of the skull. When these muscles contract, they elevate the pectoral girdle (as in shrugging) and move the scapula medially and posteriorly toward the center of the back (as in rowing). The trapezius also contracts along the back of the neck to extend the head at the neck and hold it upright throughout the day.

Nine muscles of the chest and upper back are used to move the humerus (upper arm bone). The coracobrachialis and pectoralis major muscles connect the humerus anteriorly to the scapula and ribs, flexing and adducting the arm toward the front of the body when you reach forward to grab an object. On the posterior side of the arm the teres major and latissimus dorsi extend and adduct the arm towards the scapula and vertebra when you pull an object down off of a shelf above your head. The deltoid and supraspinatus muscles run superiorly between the scapula and humerus to abduct as well as flex and extend the arm. These muscles allow us to raise our arm in the air or swing the arm as in throwing a ball underhand. Rotation of the humerus is achieved by the actions of the subscapularis, infraspinatus, and teres minor muscles that run from the scapula to the humerus. These three rotator muscles, along with the supraspinatus, end in wide tendons that completely surround the head of the humerus and form a structure known as the rotator cuff, which holds the humerus in place and prevents dislocation. Rotation of the humerus by the rotator cuff muscles is necessary for activities such as throwing a ball overhand or swinging a hammer.

In addition to moving the arm and pectoral girdle, muscles of the chest and upper back work together as a group to support the vital process of breathing. The diaphragm is a strong, thin, dome-shaped muscle that spans the entire inferior border of the rib cage, separating the thoracic cavity from the abdominal cavity. Contraction of the diaphragm causes it to descend towards the abdomen, increasing the space of the thoracic cavity and expanding the lungs, filling them with air. Small muscles running between the ribs, known as the external intercostal muscles, lift the ribs during deep breathing to further expand the chest and lungs and provide even more air to the body. During exhalation, the diaphragm relaxes to decrease the volume of the thoracic cavity, forcing air out of the lungs. Additional air can be forced out of the lungs during deep exhalation by contraction of the internal intercostal muscles, which push the ribs together and help compress the thoracic cavity.

The abdominal head of the pectoralis major muscle 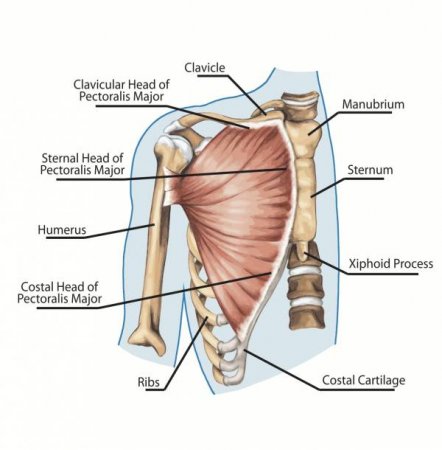 The abdominal head of the pectoralis major muscle is one of three origins for the pectoralis major. It arises from the fascia of the external oblique muscle. Broadly, pectoral is a term relating to the chest, and the pectoralis major is a large, fan-shaped muscle that covers much of the front upper chest. It begins at the breastbone (sternum) and the cartilage of the second to the sixth ribs and is attached to the collarbone (clavicle) to converge on the upper arm bone (humerus) just below the shoulder. Its main use is in moving the arm across the body. 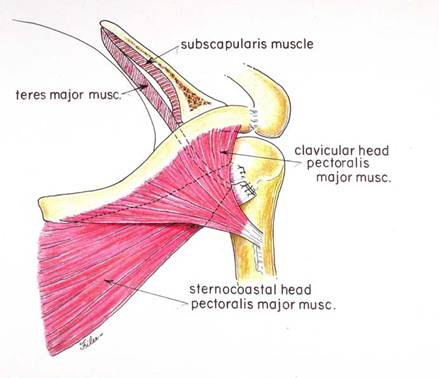 The infraspinatus muscle is one of the rotator cuff muscles. The stability of the shoulder joint is mainly provided by the tendons of the subscapularis, teres minor, infraspinatous, and supraspinatous muscles that together form the rotator cuff. The cuff is fused to the underlying joint capsule except inferiorly. Because of the lack of inferior stability, most dislocations or subluxations occur in this direction. The shoulder is most vulnerable when fully abducted and a force from a superior origin is applied. 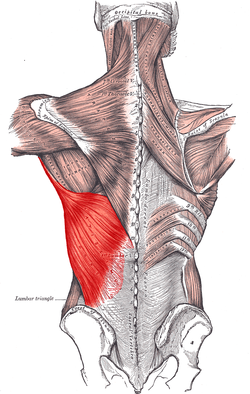 The latissimus dorsi muscle, whose name means “broadest muscle of the back,” is one of the widest muscles in the human body. Also known as the “lat,” it is a very thin triangular muscle that is not used strenuously in common daily activities but is an important muscle in many exercises such as pull-ups, chin-ups, lat pulldowns, and swimming.

The latissimus dorsi muscle has its origins along the lumbodorsal fascia of the lower back, arising from the inferior thoracic and lumbar vertebrae, sacrum, iliac crest, and the four most inferior ribs. From its many widespread origins, it runs obliquely, superiorly and laterally through the back and armpits to insert on the posterior side of the humerus of the upper arm. As the latissimus dorsi approaches its insertion point, the many muscular fibers from its many origins merge to a point, giving the muscle a triangular shape.

The latissimus dorsi has several different functions, all of which involve movements of the arm. The primary function of the lat is the adduction of the arm, which is often used when performing a pull-up or chin-up or when pulling a heavy object down from a shelf above one’s head. Another function of the lat is extension of the arm, as in swinging the arm toward the back. This motion is used when swinging the arms while walking as well as during rowing exercises. Finally, the latissimus dorsi medially rotates the arm, moving the front of the arm towards the body’s midline. When performed with a bent elbow, medial rotation of the arm brings the hand towards the chest, like when folding the arms or touching the elbow on the opposite arm. 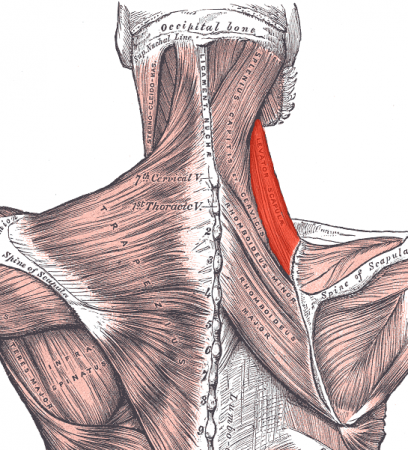 The levator scapulae muscle resides at that back and side of the neck. Levator means to lift in Latin, so as the name implies, its goal is to lift the scapula. It comes up by tendinous slips from the transverse processes of the atlas and axis and from the posterior tubercles of the transverse processes of the third and fourth cervical vertebrae. It is embedded into the vertebral border of the scapula, amid the medial angle and the triangle smooth surface at the root of the spine.

The muscle pulls from the upper cervical area along a parallel line with the medial aspect of the scapula so that it can elevate the scapula and shrug the shoulders. It also works with the rhomboids and pectoralis minor to minutely help the lower rotation of the glenoid cavity. 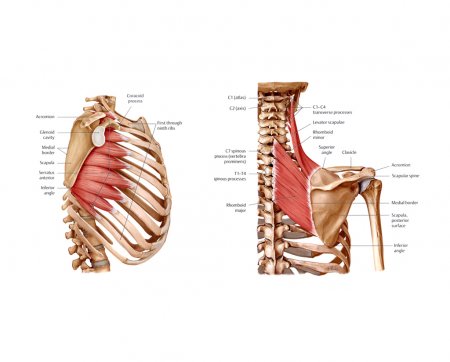 The serratus anterior muscle is a broad, curved muscle located on the side of the chest. It functions to pull the scapula (shoulder blade) down and to the front, and is used to thrust the shoulder forward as when pushing something. 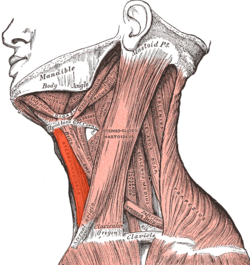 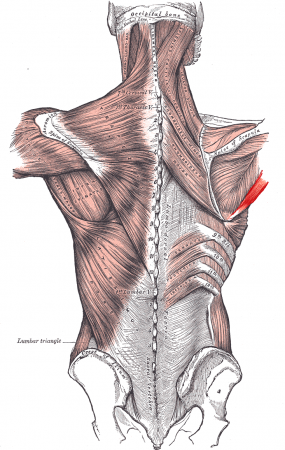 The teres major muscle is a thick, flattened muscle that brings the arm toward the body and assists in extending it when the arm is in a flexed position. There are two teres muscles. The other one is the teres minor muscle, which rotates the arm laterally and assists in bringing it toward the body. As it draws the upper arm bone (humerus) up, it strengthens the shoulder joint. The teres major muscle also aids in rotating the arm but its function is just the opposite of the teres minor and other muscles in the rotator cuff. 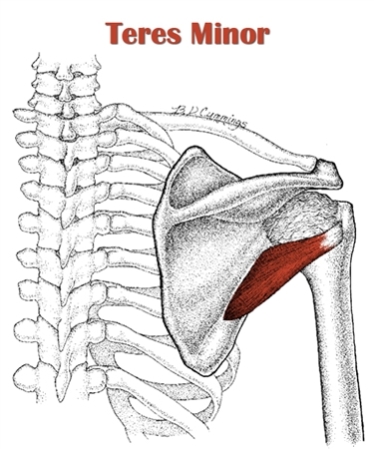 The teres minor muscle rotates the arm laterally and assists in bringing it toward the body. As it draws the upper arm bone (humerus) up, it strengthens the shoulder joint. There are two teres muscles. The other one is the teres major muscle, a thick, flattened muscle that brings the arm toward the body and assists in extending it when the arm is in a flexed position. The teres major muscle also aids in rotating the arm but its function is just the opposite of the teres minor and other muscles in the rotator cuff. 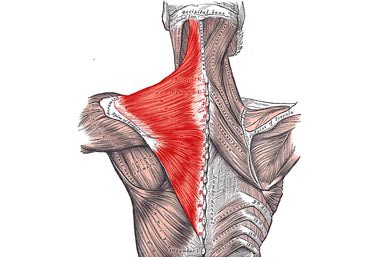 The trapezius is one of the major muscles of the back and is responsible for moving, rotating, and stabilizing the scapula (shoulder blade) and extending the head at the neck. It is a wide, flat, superficial muscle that covers most of the upper back and the posterior of the neck. Like most other muscles, there are two trapezius muscles – a left and a right trapezius – that are symmetrical and meet at the vertebral column.

The trapezius arises from ligaments at its origins along the nuchal crest of the occipital bone and the spinous processes of the cervical and thoracic vertebrae. It extends across the neck and back to insert via tendons on the clavicle, acromion, and spine of the scapula. The name trapezius is given to this muscle due to its roughly trapezoidal shape; the long base of the trapezoid is formed at the origins along the vertebrae and the short base forms at the insertions along the scapula and clavicle.

The trapezius can be divided into three bands of muscle fibers that have distinct structures and functions within the muscle.