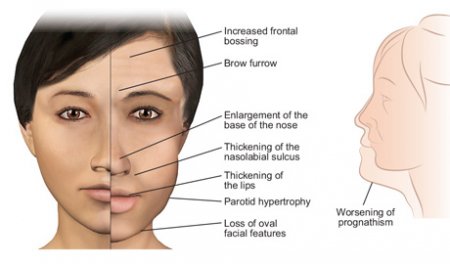 Acromegaly - this is a pathological condition of the organism, in which there is an enlargement of individual parts of the body. Such condition is provoked by excessive development of the growth hormone in the anterior lobe of the pituitary gland.

As a rule, men and women aged from 30 to 50 years are more likely to be affected by this disease, but children do not suffer from this disease. It is important to know that acromegaly is a chronic disease, and it occurs in the human body for a long period of time.

Symptoms of the Acromegaly

The main feature of this disease is the change in the size of individual parts of the body, which ultimately provides a disgusting cosmetic defect. However along with such anxiety signs progressing fatigue, general weakness, migraine attacks, pain in the limbs, dizziness, palpitations in the joints. Moreover, there is an increased hair growth and failure of the hormonal cycle, which is very problematic to restore.

During acromegaly there is an apparent metabolic disorder, which can often end with the progression of diabetes mellitus in two stages. Also, there are serious problems in the functioning of the thyroid, respectively, the diseases of the endocrine system become a major life problem.
Sexual development of males against the background of acromegaly may be markedly slowed down after a sharp surge, and in females start to develop ultimate infertility and amenorrhea.

The pathological process begins with abnormal growth and the formation of bones of the limbs, chest and mandible, which contributes to the violation of body proportions and external ugliness. Progresses osteoarthritis, muscle weakness, acute intolerance of physical activity, systematic seizures, headache, frequent attacks of arterial hypertension, increased sweating at night.

Malignant tumors of the pituitary gland are hazardous to health, and their effect on the body depends on the stage of the pathological process. The most surprising thing is that in the early stages the disease does not manifest itself, but as it grows not only negatively affects the quality of life, but it can also endanger life. Unexpectedly there is an increase in the nose, lips, limb bones (predominantly one) of the thoracic cavity, as well as widening of the intervals between the edges.
During the acromegaly body proportions are disturbed, space appears between the teeth of the mandible, progressing pachydermia, hypertrophy of the myocardium, as well as atrophy of the skeletal muscle. Patients notice a deterioration of vision, progressing diabetes mellitus and thyrotoxicosis.

In order to put a final diagnosis, you need to pass the tests, complete a clinical examination, as well as visit a competent specialist more than once. First of all, the doctor conducts a visual examination of the patient, studies the enlarged body and its features, and then directs it for diagnosis.

The main method of diagnosis is laboratory testing of blood somatotropin level, provocative tests and other tests. Clinical trials require the immediate execution of MRI, which allows you to determine the degree of malignant lesion of the pituitary gland.

Need to find out the degree of severity, need to perform electromyography and X-ray examination of the spine, joints, detailed study of the function of vision. Only after such an integrated approach you can finally decide on the diagnosis and not delay with the scheme of intensive care.

Treatment in this case is complicated, and doctors recommend immediate surgical intervention, involves the final removal of the tumor of the pituitary gland. Radiation and chemotherapy should be used to accelerate the onset of a therapeutic effect.

Especially popular in modern medical practice is the radiological method, which is combined with immediate surgical methods. There is an irradiated area of the pituitary gland, but the effect of such therapy can be observed a few years after its conduct.
If you liked this article about Acromegaly, please share it:
Recommended articles: