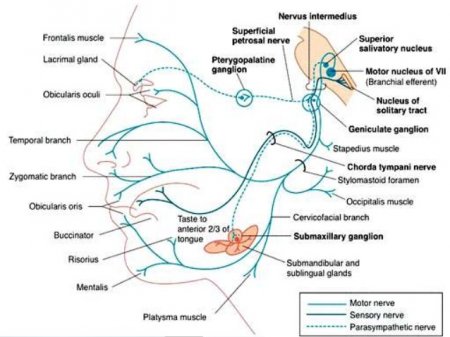 The facial nerve is one of the twelve pairs of cranial nerves in the peripheral nervous system. It is the seventh cranial nerve, and so is often referred to as cranial nerve VII or simply CN VII. Nerve signals from the cranial nerve play important roles in sensing taste as well as controlling the muscles of the face, salivary glands, and lacrimal glands.

As the facial nerve passes through the temporal bone, several smaller nerves branch off from the main nerve, including the greater (superficial) petrosal nerve and the chorda tympani.

- Nerve fibers from the greater (superficial) petrosal nerve stimulate the lacrimal glands to produce tears and moisten the eyes.
- The chorda tympani stimulates the submandibular and sublingual salivary glands to produce saliva. It also carries taste information from the anterior two-thirds of the tongue to the brain.

After passing through the stylomastoid foramen, the facial nerve emerges just inferior to the ear and splits into several superficial branches.

- The posterior auricular nerve splits from the facial nerve just beyond the stylomastoid foramen and innervates the muscles posterior to the ear, including the auricularis posterior and the occipitalis.
- Two small nerves next branch off to innervate the digastric and stylohyoid muscles.
- Finally, the temporofacial and cervicofacial branches separate to innervate the muscles of the upper and lower face, respectively. The temporofacial nerve divides into the temporal, zygomatic, and infraorbital branches to reach the frontalis and orbicularis oculi muscles, among others. Fibers from the cervicofacial branch split into the buccal, mandibular, and cervical nerves to innervate the nasalis, zygomaticus major, buccinator, orbicularis oris, platysma, and other muscles surrounding the nose and mouth.