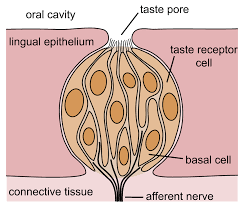 The taste buds are sensory taste receptors found on the tongue, throat, and palate that help form the perception of taste. Taste buds detect chemicals dissolved in saliva from food in the mouth and throat. Then, these taste buds send their sensory information through neurons to the gustatory center of the brain. The average person has around 10,000 taste buds in their mouth and throat, although the number of taste buds peaks in early childhood and declines throughout our lives.

The surface of the tongue is covered with many tiny projections of epithelium called papillae. Papillae increase the surface area of the tongue, provide a rough surface to grip food, and protect the taste buds that grow along their sides. Taste buds are found in the walls of tiny valleys between the papillae, where their surface is exposed to chemicals dissolved in saliva while being protected from damage. Each taste bud is derived from a group of specialized epithelial cells that are connected to sensory neurons. Basal cells at the base of the taste bud act as stem cells that reproduce to form new epithelial cells called supporting cells. The supporting cells grow and develop into taste receptor cells. The taste receptor cells have thin cellular projections called taste hairs; these taste hairs extend into taste pores, which are tiny pockets connecting to the surface of the papilla. Each taste bud contains around 100 receptor cells that die and are replaced every few days.

Soluble chemicals present in food are dissolved by saliva very quickly after being placed in the mouth. These dissolved chemicals, known as tastants, spread throughout the mouth, enter the valleys between the papillae of the tongue, and pass into the taste pores. Taste hairs extending into the taste pores detect these tastants and stimulate their connected taste receptor cells to pass signals on to the sensory neurons in the tissue deep to the taste bud. These signals are passed on to the gustatory region of the brain where the sense of taste is interpreted.

- The sweet taste is created by carbohydrates such as sucrose and fructose, as well as artificial sweeteners such as aspartame and saccharine.
- The salty taste is generally created by salts containing sodium ions, such as sodium chloride (table salt) and sodium bicarbonate (baking soda). Salts containing potassium, lithium, and other alkali metal ions also produce a mildly salty flavor.
- Acidic compounds, such as citric acid and vinegar, produce sour flavors.
- Bitter flavors are produced by a variety of organic compounds and are generally considered an undesirable or unpalatable flavor. Many toxic chemicals produced by poisonous plants have a bitter taste, thus leading to the negative reaction to bitter foods.
- Umami, or savoriness, is the most recently discovered taste, found in foods that have a “meaty” taste due to the presence of the chemical glutamate. Meat, cheese, mushrooms, and the chemical monosodium glutamate (MSG) all contain glutamate.
If you liked this article about The taste buds, please share it:
Recommended articles: