Physiology of the respiratory system 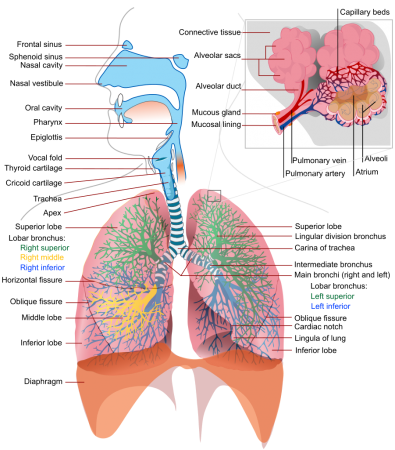 To exhale air, the diaphragm and external intercostal muscles relax while the internal intercostal muscles contract to reduce the volume of the thorax and increase the pressure within the thoracic cavity. The pressure gradient is now reversed, resulting in the exhalation of air until the pressures inside the lungs and outside of the body are equal. At this point, the elastic nature of the lungs causes them to recoil back to their resting volume, restoring the negative pressure gradient present during inhalation.

External Respiration
External respiration is the exchange of gases between the air filling the alveoli and the blood in the capillaries surrounding the walls of the alveoli. Air entering the lungs from the atmosphere has a higher partial pressure of oxygen and a lower partial pressure of carbon dioxide than does the blood in the capillaries. The difference in partial pressures causes the gases to diffuse passively along their pressure gradients from high to low pressure through the simple squamous epithelium lining of the alveoli. The net result of external respiration is the movement of oxygen from the air into the blood and the movement of carbon dioxide from the blood into the air. The oxygen can then be transported to the body’s tissues while carbon dioxide is released into the atmosphere during exhalation.

Homeostatic Control of Respiration
Under normal resting conditions, the body maintains a quiet breathing rate and depth called eupnea. Eupnea is maintained until the body’s demand for oxygen and production of carbon dioxide rises due to greater exertion. Autonomic chemoreceptors in the body monitor the partial pressures of oxygen and carbon dioxide in the blood and send signals to the respiratory center of the brain stem. The respiratory center then adjusts the rate and depth of breathing to return the blood to its normal levels of gas partial pressures.
If you liked this article about Physiology of the respiratory system, please share it:
Recommended articles: