The respiratory system of the head and neck 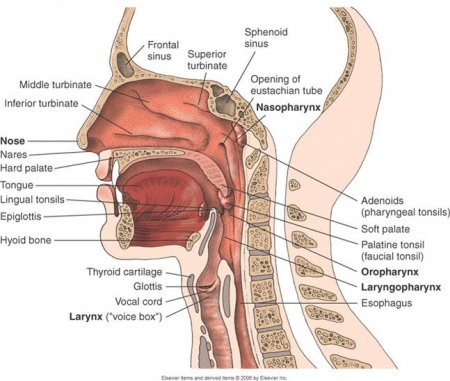 The important parts of the respiratory system in the head and neck include the nasal cavity, which processes the airflow on its way through to the lungs. Connected to the nasal cavity is the pharynx that is actually a part of the respiratory and digestive systems. It allows for the passage of both food and air. It lies behind and to the sides of the larynx, or voice box, which forms part of a tube in the throat that carries air to and from the lungs and houses the epiglottis. At rest, the epiglottis is upright and allows air to pass through the larynx and into the rest of the respiratory system. During swallowing, it folds back to cover the entrance to the larynx, preventing food and drink from entering the windpipe. The trachea, or windpipe, allows the head and neck to twist and bend during the process of breathing.

All of these parts in the head and neck play a significant role in directing oxygen to the lungs so that the body can breathe in oxygen.

Structure of the upper respiratory system

Epiglottis
The epiglottis is a flexible flap at the superior end of the larynx in the throat. It acts as a switch between the larynx and the esophagus to permit air to enter the airway to the lungs and food to pass into the gastrointestinal tract. The epiglottis also protects the body from choking on food that would normally obstruct the airway.

The epiglottis is made of elastic cartilage covered with mucous membrane. Its anterior surface consists of nonkeratinized stratified squamous epithelium that is consistent with the tissues of the mouth and pharynx. On the posterior surface, it is covered with pseudostratified columnar epithelium that is consistent with the tissues lining the larynx. Under the epithelial layer is a thin layer of areolar connective tissue that provides a loose attachment for the epithelium and supplies it with blood vessels and nerve fibers. The deepest and thickest layer of the epiglottis is the elastic cartilage layer, which consists of a gel-like matrix and many elastin protein fibers. Elastic cartilage gives the epiglottis a firm, yet extremely flexible and elastic structure.

Throughout each day, the epiglottis spends the vast majority of its time relaxed at the superior edge of the larynx just posterior to the tongue. In this position, air is able to enter the pharynx from the nose or mouth and pass freely into the larynx and onward to the lungs. It is only when we swallow food or drink that the epiglottis moves and performs its vital function. The process of swallowing is a complex process involving many structures in the head and neck. During this process, the pharynx, hyoid and larynx are pulled superiorly to allow the pharynx to widen and receive the material being swallowed. The movement of the hyoid allows the wide superior portion of the epiglottis to fold down on top of the glottis of the larynx, covering the opening of the airway. Food entering the pharynx passes over the anterior surface of the epiglottis, which forms the roof of the glottis; the food continues into the esophagus located just posterior to the pharynx.

Ethmoid sinus
The ethmoid sinus is actually a pair of paranasal sinuses. They help filter the air that goes into the nasal cavity. These are located inside the ethmoid bone, which consists of ethmoidal air cells. There are three groups of the ethmoidal air cells: posterior, middle, and anterior. The cells are made up of a lot of cavities that have thin walls that reside in the ethmoidal labyrinth and are finished by the maxilla, frontal, lacrimal, palatine, and sphenoidal bones. They rest amid the top portion of the orbits and the nasal cavities, and thin and bony laminae keep them apart from the cavities.

Gingiva (gums)
Gingiva, commonly called the gum, is the soft tissue that covers and protects the root of the tooth. The gum is not attached to the tooth. Continuously, instead, between the tooth and the area around the tooth is a shallow v-shaped groove called the sulcus.

Hyoid bone
The hyoid bone is a U-shaped bone just under the mandible. The hyoid is closely associated with the skull but is not strictly a part of it. It anchors muscles, especially those of the tongue, and is the only bone in the body that is not linked to another. The blood vessels into and out of the hyoid bone are small branches of the external carotid artery, and are called superior thyroid arteries and superior thyroid veins.

Larynx
The larynx (voice box) is part of the respiratory system that holds the vocal cords. It is responsible for producing voice, helping us swallow and breathe. Air passes in and out of the larynx each time the body inhales or exhales. Air from the lungs passes over the stretched vocal cords, and the vibrations are modified by the tongue, palate, and lips to produce speech.

It is composed primarily of muscles and cartilages that are bound together by elastic tissues. It lies between the pharynx (upper part of the air passages) and the trachea (windpipe), and forms part of a tube in the throat that carries air to and from the lungs. It consists of areas of tough, flexible tissue called cartilage, which sticks out at the front of the throat to form the Adam's apple. Below this, connecting the thyroid cartilage to the trachea is another cartilage that is shaped like a signet ring with the seal at the back of it. Just on top of this seal are two pyramid-shaped cartilages, and between these two cartilages and the inner surface of the Adam's apple stretch two fibrous sheets of tissue, called the vocal cords, which are responsible for voice production.

The larynx also has the important function of preventing choking. When we are not eating or drinking, the epiglottis stays upright, keeping the larynx open as part of the airway to the lungs; as soon as swallowing begins, the epiglottis drops like a lid over the larynx, directing food to either side. Closing the vocal cords also helps to protect the air passage. The food or drink passes down the esophagus to the stomach. The larynx is used when we swallow, talk, and breathe.

Maxillary sinus
The maxillary sinus, also known as the antrum of Highmore, is the largest of the sinuses--air-filled spaces that extend from the floor of the orbits to the roots of the upper teeth.

Nasopharynx
The nasopharynx is located above the soft palate. It communicates with the nasal cavity and provides a passageway for air during breathing. The eustachian tubes, which connect the pharynx with the middle ears, open through the walls of the nasopharynx.

Trachea (windpipe)
The trachea (or windpipe) is a wide, hollow tube that connects the larynx (or voice box) to the bronchi of the lungs. It is an integral part of the body’s airway and has the vital function of providing air flow to and from the lungs for respiration.

The trachea begins at the inferior end of the larynx in the base of the neck. It is located along the body’s midline, anterior to the esophagus and just deep to the skin, so that it is possible to feel the larynx through the skin of the neck. From its origin at the larynx, the trachea extends inferiorly into the thorax posterior to the sternum. In the thorax, the trachea ends where it splits into the left and right bronchi, which continue onward toward the lungs.

Four layers of tissues make up the walls of the trachea:

- The mucosa is the innermost layer and consists of ciliated pseudostratified columnar epithelium with many goblet cells. Goblet cells produce sticky mucus to coat the inner lining of the trachea and catch any debris present in inhaled air before it reaches the lungs. On the surface of the columnar cells, long, hair-like cilia beat together to push mucous away from the lungs like a microscopic conveyor belt. Mucus from the trachea, along with any trapped contaminants, makes its way to the larynx, where it is either expelled during coughing or swallowed and digested in the stomach.
- Deep to the mucosa is the submucosa layer, which is made of areolar connective tissue containing blood vessels and nervous tissue. Many collagen, elastin and reticular protein fibers give soft support and elasticity to the wall of the trachea, while blood vessels and nerves support the other layers of the tracheal wall. Longitudinal smooth muscle fibers are present in the posterior trachea between the ends of the cartilage rings. This smooth muscle tissue allows the trachea to adjust its diameter as needed.
- Surrounding the submucosa is a layer of hyaline cartilage that forms the supportive rings of the trachea. Hyaline provides a strong, yet flexible structure that maintains an open airway and is resistant to external stresses.
- The outermost layer of the trachea is the adventitia, a layer of areolar connective tissue that loosely anchors the trachea to the surrounding soft tissues.

While the trachea plays a vital role as a passive air passageway, it also performs several other important functions as well. The trachealis muscle in the posterior wall allows the trachea to contract and reduce its diameter, which makes coughs more forceful and productive. During the process of swallowing food, the esophagus expands into the space normally occupied by the trachea. The incomplete cartilage rings of the trachea allow it to narrow and permit the esophagus to expand into its space. Finally, the loose connection of the adventitia allows the trachea to move within the neck and thorax, aiding the lungs in their expansion and contraction during breathing.
If you liked this article about The respiratory system of the head and neck, please share it:
Recommended articles: