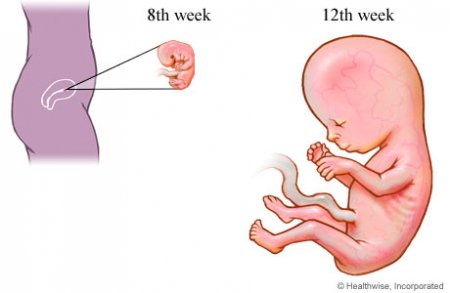 During the first trimester, the fetus goes through a huge developmental process. For the first eight weeks of its life, the fertilized egg is called the embryo. The embryo develops from an egg fertilized by the sperm. It begins as one cell, which divides into two cells by the time it descends from the fallopian tube into the uterus. These cells divide further until they form two groups - one making up the wall lining of the embryo to become the placenta and the second becoming the embryo itself. Early in the third week, the embryo becomes pear-shaped. The head forms at the rounded end and the spine at the pointed end. These two halves grow toward each other until they fuse to form the neural tube.

During the fourth week, the embryo becomes recognizable as a mammal. Inside, buds of tissue form what will later develop into the lungs, pancreas, liver and gallbladder. A broad fold in the head becomes visible to later develop into the brain. Ears appear as pits; eyes develop as stalks, and folds of tissue, which will become the jaws and other structures of the neck, appear. On the sides, cartilage, bone and muscle of the back emerge in paired bulges. Just beneath the head, in the front, the heart develops. It is during this period that the embryo is at the greatest risk of birth defects.

During the fifth week, external ears become visible, pits appear to mark the nose, the upper and lower jaws form, and the limb buds extend into flippers that will develop into hands and feet. Two folds of tissue meet and fuse in the front of the embryo to form the front wall of the chest and abdomen, and the umbilical cord develops.

From six to eight weeks, the face becomes readily recognizable as a human. The neck forms, the torso and head become more erect, the tail disappears and the limbs become jointed, forming fingers and toes. At this time, the embryo is about one inch in length and most of the internal organs have developed along with the external features.
If you liked this article about The fetus (First Trimester), please share it:
Recommended articles: