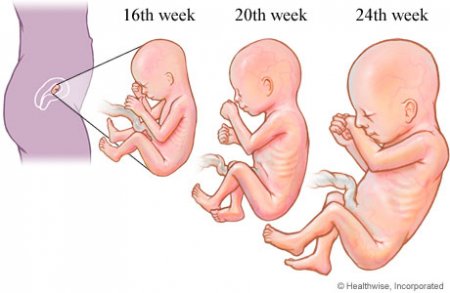 During the second trimester, a fetus begins to take the shape of a baby. At eight weeks, the embryo is a full-formed, tiny baby, now called a fetus. Bodily proportions change as the limbs and trunk grow, reducing the head from one-half to one-fourth of the body length. By fifteen weeks, the fetus can kick, curl its fingers and toes, and squint its eyes. Genitals have developed so it can be seen to be either a male or female child, and the kidneys work. A fine, downy hair covers all the limbs and trunk, the palms of the hands and soles of the feet.

At about the twentieth week, or in the fifth to the sixth months, secondary hair begins to replace the down, but some babies are born with smooth hair on the shoulders, chest or ears that disappears within a short time. Hair, eyebrows and eyelashes grow during the twentieth week, followed by fingernails and toenails. Within the sac of fluid, the fetus begins to move and swallow, taking in amniotic fluid.

A fetus may begin thumb-sucking during the fifth month and in the sixth, the fetus gains the grasping reflex, which is familiar in newborn babies. By the twentieth week, the heartbeat can be heard through a stethoscope and at twenty-four weeks, the fetus can survive outside the womb if placed in an intensive care unit. Until it is bathed, a newborn baby looks and feels a little oily. A whitish material called vernix caseosa protects the skin of the fetus and keeps it from getting waterlogged. The waxy substance appears in about the fifth month and is like the grease used by long-distance swimmers.
If you liked this article about The fetus (Second Trimester), please share it:
Recommended articles: