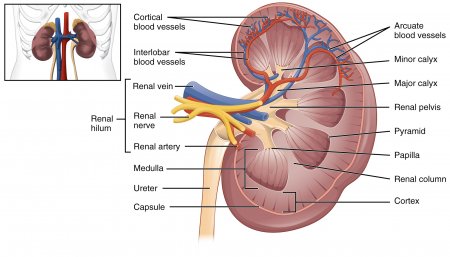 The kidneys are the waste filtering and disposal system of the body. As much as 1/3 of all blood leaving the heart passes into the kidneys to be filtered before flowing to the rest of the body’s tissues. While a person could live with only one functioning kidney, our kidneys are vital organs; the loss of both kidneys would lead to a rapid accumulation of wastes and death within a few days time.

Anatomy of the kidneys

Location of the kidneys
The kidneys are a pair of organs found along the posterior muscular wall of the abdominal cavity. The left kidney is located slightly more superior than the right kidney due to the larger size of the liver on the right side of the body. Unlike the other abdominal organs, the kidneys lie behind the peritoneum that lines the abdominal cavity and are thus considered to be retroperitoneal organs. The ribs and muscles of the back protect the kidneys from external damage. Adipose tissue known as perirenal fat surrounds the kidneys and acts as protective padding.

A thin layer of fibrous connective tissue forms the renal capsule surrounding each kidney. The renal capsule provides a stiff outer shell to maintain the shape of the soft inner tissues.

The Nephron
Each kidney contains around 1 million individual nephrons, the kidneys’ microscopic functional units that filter blood to produce urine. The nephron is made of 2 main parts: the renal corpuscle and the renal tubule.

Physiology of the kidneys

Excretion of Wastes
The primary function of the kidneys is the excretion of waste products resulting from protein metabolism and muscle contraction. The liver metabolizes dietary proteins to produce energy and produces toxic ammonia as a waste product. The liver is able to convert most of this ammonia into uric acid and urea, which are less toxic to the body. Meanwhile, the muscles of our body use creatine as an energy source and, in the process, produce the waste product creatinine. Ammonia, uric acid, urea, and creatinine all accumulate in the body over time and need to be removed from circulation to maintain homeostasis.

The glomerulus in the kidneys filter all four of these waste products out of the bloodstream, allowing us to excrete them out of our bodies in urine. Around 50% of the urea found in the blood is reabsorbed by the tubule cells of the nephron and returned to the blood supply. Urea in the blood helps to concentrate other more toxic waste products in urine by maintaining the osmotic balance between urine and blood in the renal medulla.

1. The kidneys filter blood as it passes through the capillaries that form the glomerulus. Blood pressure forces most of the blood plasma through the lining of the capillaries and into the glomerular capsule. Blood cells are too large to pass through the capillary lining and so remain within the capillaries along with some residual plasma. The filtered plasma, now known as tubular fluid, begins to flow out of the glomerular capsule and into the proximal convoluted tubule.
2. At the same time, the concentrated blood that remains inside the capillaries of the glomerulus moves into the efferent arterioles and on to the peritubular capillaries surrounding the proximal convoluted tubule. Epithelial cells lining the tubule actively reabsorb valuable molecules of glucose, amino acids, and ions from the filtrate and deposit them back into the blood. These cells also absorb any waste products remaining in the blood (such as ammonia and creatinine) and secrete these chemicals into the filtrate. While these solutes are being exchanged, osmotic pressure pushes water from the dilute, hypotonic filtrate back into the concentrated, hypertonic blood.
3. From the proximal convoluted tubule, the tubular fluid next enters the loop of Henle, where water and ions are reabsorbed. The descending limb of the loop of Henle is permeable to water and carries the filtrate deep into the medulla of the kidney. Tissues in the medulla surrounding the tubule contain a high concentration of ions and very little water compared to the filtrate. Osmotic pressure between the hypotonic filtrate and hypertonic medullary cells pushes water out of the filtrate and into the cells. The cells of the medulla return this water to the blood flowing through nearby capillaries.
4. Filtrate next passes through the ascending limb of the loop of Henle as it exits the medulla. The tissues surrounding the ascending limb are not permeable to water but are permeable to ions. The filtrate is very concentrated after passing through the descending limb, so ions easily diffuse out of the filtrate and into the cells lining the ascending limb. These ions are returned to the blood flowing through nearby capillaries.
5. Tubular fluid exiting the loop of Henle next passes through the distal convoluted tubule and the collecting duct of the nephron. These tubules continue to reabsorb small amounts of water and ions that are still left in the filtrate. The tissues surrounding the collecting duct actively absorb excess potassium and hydrogen ions from the nearby capillaries and secrete these excess ions as waste into the filtrate.
6. When filtrate reaches the end of the collecting duct, almost all of the valuable nutrients, ions, and water have been returned to the blood supply while waste products and a small amount of water are left to form urine. The urine exits the collecting duct and joins with urine from other collecting ducts in the renal pelvis.

Water Homeostasis
The kidneys are able to control the volume of water in the body by changing the reabsorption of water by the tubules of the nephron. Under normal conditions, the tubule cells of the nephron tubules reabsorb (via osmosis) nearly all of the water that is filtered into urine by the glomerulus.

In situations where there is too much water present in the blood, our heart secretes the hormone atrial natriuretic peptide (ANP) in order to increase the excretion of Na+ and Cl- ions. Increased concentration of Na+ and Cl- in urine draws water into the urine via osmosis, increasing the volume of urine produced.

The reabsorbed bicarbonate ions enter the bloodstream where they can neutralize hydrogen ions by forming new molecules of carbonic acid. Carbonic acid passing through the capillaries of the lungs dissociates into carbon dioxide and water, allowing us to exhale the carbon dioxide.

Electrolyte Homeostasis
The kidneys maintain the homeostasis of important electrolytes by controlling their excretion into urine.

Hormones
The kidneys maintain a small but important endocrine function by producing the hormones calcitriol and erythropoietin.

- Calcitriol is the active form of vitamin D in the body. Tubule cells of the proximal convoluted tubule produce calcitriol from inactive vitamin D molecules. At that point, calcitriol travels from the kidneys through the bloodstream to the intestines, where it increases the absorption of calcium from food in the intestinal lumen.
- Erythropoietin (EPO) is a hormone produced by cells of the peritubular capillaries in response to hypoxia (a low level of oxygen in the blood). EPO stimulates the cells of red bone marrow to increase their output of red blood cells. Oxygen levels in the blood increase as more red blood cells mature and enter the bloodstream. Once oxygen levels return to normal, the cells of the peritubular capillaries stop producing EPO.

Several hormones produced elsewhere in the body help to control the function of the kidneys.

- Antidiuretic hormone (ADH), also known as vasopressin, is a hormone produced by neurosecretory cells in the brain’s hypothalamus. These cells extend into the posterior pituitary, which stores and releases ADH. ADH production is stimulated by a decrease in blood volume and increased blood osmolarity. ADH helps the body retain water by increasing the number of water channels in the cells of the collecting ducts of the kidneys. These water channels allow water remaining in urine to be reabsorbed into the blood, resulting in extremely concentrated urine.
- Angiotensin II is a hormone made in the liver and activated by the enzymes renin and angiotensin-converting enzyme. Once activated, angiotensin II increases the reabsorption of sodium and chloride ions in the proximal convoluted tubule, leading to an increased reabsorption of water as well.
- Aldosterone is a hormone produced in the adrenal cortex in response to Angiotensin II. Aldosterone binds to target cells in the walls of the nephron’s collecting ducts. These cells reabsorb additional sodium and chloride ions that would have been excreted as urine. The target cells also remove potassium ions from the blood and excrete it into urine.
- Atrial natriuretic peptide (ANP) is a hormone produced by cardiac muscle cells in the atria of the heart. These cells produce ANP in response to high levels of sodium in the blood or increased blood pressure. In the kidneys, ANP increases the glomerular filtration rate so that more blood plasma is forced into the glomerular capsule and into the renal tubules. ANP also removes some solutes from the cells of the renal medulla, making the loop of Henle less efficient in reabsorbing water and ions from the filtrate. The net result of ANP is that more sodium and water end up being excreted into urine, blood volume decreases, and blood pressure decreases as well.
If you liked this article about The kidneys, please share it:
Recommended articles: