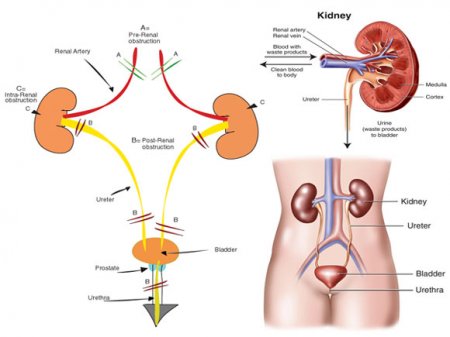 Acute kidney failure is a syndrome of sudden, rapid reduction or termination of the function of both kidneys (or a single kidney), resulting in accumulation of waste protein metabolism in the body.

Symptoms of the acute kidney failure

Symptoms of the acute kidney failure include:
- a small amount of urine (oliguria);
- complete absence (anuria).

The patient's condition worsens, it is accompanied by nausea, vomiting, diarrhea, lack of appetite, there are swelling of the extremities, the volume of the liver increases. A patient may be inhibited or vice versa.

In the clinical course of acute kidney failure there are distinguished several stages:
The first stage - initial (symptomatic due to direct effect of the cause that caused acute renal failure), lasts from the time of the effect of the underlying cause to the first symptoms on the part of the kidneys has a different duration (from several hours to several days). There may be intoxication (pallor, nausea, pain in the abdomen).

The second stage is oligo-anuric (the main sign is oliguria or complete anuria, also the patient's general condition is severe, the appearance and rapid accumulation of urea and other end products of protein metabolism in the blood, causing self-poisoning of the body, manifested by inhibition, adynamy, drowsiness, diarrhea, arterial hypertension, tachycardia, edema of the body, anemia, hepatic insufficiency.

The third stage - regenerative:
- phase of early diuresis - the clinic is the same as in the II stage;
- phase of polyuria (increased urine formation) and restoration of the concentration ability of the kidneys - renal functions are normalized, the functions of the respiratory and cardiovascular systems, the digestive canal, the support and movement apparatus, the central nervous system are restored. The stage lasts about two weeks.

The fourth stage - recovery - anatomical and functional restoration of renal activity to the initial parameters. It can take many months, sometimes it takes up to one year.

Chronic renal failure is a gradual decrease in the function of the kidneys until it completely disappears, caused by the gradual death of the kidney tissue as a result of chronic kidney disease, the gradual replacement of renal tissue with a connective tissue and the wrinkling of the kidney.

Chronic kidney failure occurs in 200-500 of one million people. At present, the number of patients with chronic renal failure increases annually by 10-12%.

Prevention of the kidney failure

Prevention of the kidney failure is reduced to the treatment of such chronic diseases as: pyelonephritis, glomerulonephritis, urolithiasis.
If you liked this article about Acute kidney failure, please share it:
Recommended articles: